It is said that a good leader does not simply lead. A good leader inspires. A good leader can take any ragtag assembly of layabouts and transform them into a steel python, ready to strike on command.

But we’re not commanding soldiers here. We’re commanding Battlefield 4 players. So forget all of that, and for the love of fuck put away that copy of The Art Of War.

Note: This guide was made with the PS4 version in mind, but many points will be applicable across platforms. It mainly deals with Conquest mode.

Commander Mode returns for Battlefield 4 after being conspicuously absent in BF3.  This guide will assume that you’re unfamiliar with the Commander Mode found in BF2, but we’ll quickly cover the key differences now:

1. You are incorporeal. In BF2, you began the round as a soldier just like everybody else. When you were focused on your commander map it meant that you couldn’t really pay any attention to your surroundings, leaving you extremely vulnerable. In BF4, the commander does not have a presence on the battlefield. In many respects this was a wise decision as it now means that the commander is committed to his duties. Unfortunately though it removes a few of the very fun quirks of BF2, like commander-on-commander knife fights, abusing the commander functions in combat to become an omnipresent super-soldier and so on.

2. Commander “assets” are tied to control points. Commander abilities such as supply crates, vehicle drop and missile strike (“arty”)” are only available if you own the control point that they are tied to.  Previously these abilities were tied to structures on the map that could be destroyed and repaired.

3. Simple orders. Now that it’s no longer necessary to repair/destroy commander assets, you have just one button to push when ordering troops. The order issued will either be “attack”,”defend” if your target is a control point, or “move here” if the target is not.

I’ve found that BF4’s simplified Commander Mode is not as engaging or as skill-testing as it was in BF2. This could be the reason that that the Commander slot seems to be vacant most of the time. One benefit of this is that  if you assume the role of Commander, you will often be battling an army that doesn’t have one, giving your side a tactical edge on the field.

That said, let’s start with an explanation of the commander screen: 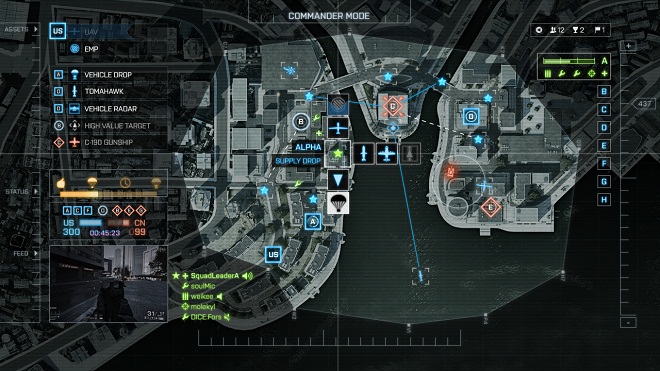 What you see is a bird’s eye view of the map. You can see the status of all control points and the location of your troops and squad leaders (blue). Enemies are red, and won’t appear on the map unless spotted or under a UAV. The list of squads is shown on the right side of the screen, with the selected squad in green. In the lower right you can see a live feed from the POV of the selected squad leader. On the upper left there is a list of your abilities and bars indicating cooldown times. Pushing X will bring up a list of abilities; select them using the d-pad. The abilities are:

Order: Sends an order to the selected squad (attack/defend/move).

UAV: Reveals enemies to you and your team. Covers an area large enough to see all enemies who are actively capping a control point. Shortcut: R1. Duration: 10 seconds/ Cooldown: 1 second.

EMP: The anti-UAV. This hides your team from the enemy commander and troops. Covers an area equal in size to the UAV. Shortcut: L1. Duration: 20 seconds/ Cooldown 20 seconds.

Cruise Missile: A direct strike onto the battlefield. Area covered is about half that of a UAV. The ability to use this will depend on whether you control the corresponding control point. Not available on all maps.  There is a delay of 5-10 seconds before the missiles come down. Cooldown duration varies, but it is definitely not spammable.

Evac Orders: Issues a warning to evacuate the area. Use this if the enemy commander uses the Cruise Missile. Cooldown: 20 seconds.

Infantry/Vehicle Scan. This temporarily reveals their location on your map. Takes 30 seconds to scan and has a cooldown of 30 seconds.

Gunship: Deploys a circling gunship that can be used by your troops to shoot units on the ground. There can be only one on the map and it can be destroyed, but you can re-deploy instantly. Not available on all maps.

Promote Squad: This promotes a squad one level up on field upgrades. This will allow the squad to perform better based on which upgrade system they have chosen. Uses 1/4 of the energy meter. Cooldown: 15 seconds.

Ammo Drop: Drops a supply crate that infantry can use to restock ammo and health. Uses 1/2 the energy meter. Cooldown: 15 seconds.

Proxy Attack: This disables the opposing commander’s core functions for 15 seconds. This is as annoying as it sounds. They will still be able to view troops and issue orders though. Cooldown: Unsure exactly how long, around 7-9 minutes.

Zoom In: Pressing R3 will allow you to get a closer look at the action. This is crucial for observing crowded areas.

3D View: Press L3 to see a real-time satellite view. Important HUD info is not displayed here but you may occasionally spot an enemy tank.

Chain of command: the squad leader will receive the order and then decide whether or not to accept it and pass it on to their squad. You and the squad will earn points just for accepting orders (even if they choose not to actually follow them) and bonus points for enemies shot/killed in the vicinity of the selected area. In my time playing I’ve found that only a small number of squad leaders will accept orders 100% of the time. It’s infuriating when you order a squad leader to capture a control point that you know is unoccupied, only to have them run right past it. Ordering a squad to cross the entire map is futile, even if you know that it is a winning strategy. If you do find a squad leader who will follow your orders though, be sure to shower them in benefits as a reward. You are better off waiting to see where the squad is heading and then issuing an order at that location so you can get those extra points.

Know your heroes. Recognise which squads are competent and make sure they get what they need. Generally speaking, don’t expect snipers or people in jets to follow your orders.

The UAV is the function that you’ll be using the most. Get used to using R1 to quickfire these as you will be using them often. With a cooldown of only 1 second you should really have one of these going at all times. The location of the UAV should always be where it is most important that your troops have an advantage. Look out for control points that are being contested and other areas where your team is concentrated. The best place to use this may not always be the biggest firefight. A single soldier attempting a sneak control point conversion is likely to be paranoid and jumpy; your assistance may mean the difference between capping or not.

Follow through. You sent an order, the squad leader accepted and it looks like they’re going to actually carry it out. Awesome! What do you do now? Forget about ’em, right? Heavens no! Let them have some sweet UAV action and help them get the job done. If the battle is prolonged, drop a resupply crate to keep them strong.

A solid strategy for using the EMP is to always use it reactively. Wait until you can see the outline of the enemy UAV, and throw it down there. Using EMP proactively to cover an assault always attracts the attention of the enemy commander.  The EMP can also be used to foil enemy missile strikes.

Dealing with your counterpart. In BF4, the enemy commander has multiple ways to mess with you and vice versa. Wait until the enemy commander uses his EMP before launching a Cruise Missile. Follow it up with a Proxy Attack to ensure that the missile hits its mark.

Squad selection: Using up/down on the d-pad to select squad is annoying because it takes about 3/4 of a second before you can change squads. This is due to the loading time required to obtain the live-feed. This makes quickly cycling through squads impossible. It’s less annoying to use the square button to select the squad once you have the cursor over them, and then using square again to issue the order.

I’ll be updating this as I come across more strategies. If there’s anything I missed feel free to let me know in the comments.