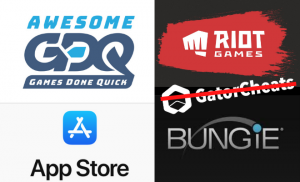 The week-long celebration, displaying the best and funnest parts of speedrunning, and the speedrunning community, has managed to raise a whopping $2.7 million US dollars for the cancer charity, Prevent Cancer Foundation.

Speedrunning is the practice of completing a game as quickly as possible, using exploits, clever tricks, and community cooperation to come up with the quickest, most efficient route.

For 10 years Awesome Games Done Quick has been running, with elaborate speedruns being streamed online, 24/7 for the duration of the week, with all donations going directly to charity. Games on the lineup for this event included Ori and the Will of the Wisps, Ecco the Dolphin, Silent Hill 3, and several more, providing a wide array of speedruns for viewers to watch, and for speedrunners to zoom through.

Riot Games and Bungie have teamed up to file a joint lawsuit targeting a cheat-maker, who has created cheats and hacks for the video games Valorant and Destiny 2.

The alleged cheat-maker, Cameron Santos, allegedly runs a number of business ventures that take part in the development, distribution, and sale of cheats and hacks for the games. Some of these cheats are said to include auto-aim software and reveal enemy locations, giving cheaters an unfair advantage in these games, which have a strong multiplayer community, and many player-vs-player activities.

“The success of [Destiny 2 and Valorant] depends on them being enjoyable and fair for all players… [Santos’] Cheating Software has caused [both Riot and Bungie] to suffer irreparable damage to their goodwill and reputation.” reads the lawsuit.

The most prominent offender is his business GatorCheats, which claims to “sell high quality cheats and services for the most popular games on the market.”

Time will tell as the lawsuit progresses, although Riot Games and Bungie have demanded that GatorCheats and other cheating software be shut down, with payment for alleged damages.

Apple removes 39,000 games from the App Store in China

Titles removed from the App Store in China includes Assassin’s Creed Identity, and NBA 2K20, with the purge reportedly being the result of strict licensing regulations by Chinese authorities, and are being enforced by Apple.

Apple had given publishers a mid-2020 deadline to obtain the appropriate license, which would allow them to release and support games that use in-app purchases, and had extended the deadline to the end of December last year.

However, many companies failed to meet the deadline, resulting in 46,000 apps being affected, with 39,000 of those being video games.