Twitch Sings will be no more

Twitch TV has confirmed that it will be closing down Twitch Sings at the end of this year starting from December 1st with January 1st, 2021 being the total deadline. Twitch will be removing all content that is linked to the Sings wing of the service such as clips, highlights, videos as well as any remaining VODs. In a FAQ Twitch has said to be “inspired” by all the passionate fans and talent that has been drawn to the service and intends on investing in the “broader tools and service” to help assist the music community on the streaming platform. There has been a lot of disappointment around the closure of Twitch Sings with one fan saying, “I’m not going to lie, I’ve been quiet depressed during the pandemic, Twitch Sings the beautiful people I have made friends with has been a singular saving grace.” BGG is a multi-age platform and LGBTIQ+ online gaming community with over 6,000 followers on Facebook comprising of mostly black women who share their love and passion for gaming. Created by Jay-Ann Lopez back in 2015 to help create a gaming space that was less toxic for black women. Lopez said that she was frustrated with the racism and misogyny that she was experiencing and that she wanted to increase visibility and inclusion for women within the industry. The isn’t Jay-Ann’s first time creating a community for minorities, she’s also created an online empowerment platform called Curlture which encourages black women to embrace their natural hair and beauty. Black Girl Gamers community now has over 50,000 followers across Twitch, Twitter and Instagram if you’d like to spread the word and support this awesome community or simply join up for some wholesome gamer community action. 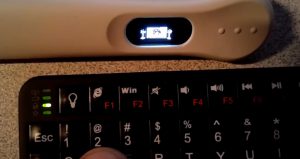 Play DOOM on a pregnancy test

That’s right you heard me, thanks to Foone Turing who is a collector and computer tinkerer posted on Reddit showing off a GIF of DOOM that was rendered on a pregnancy test display. In the GIF you can see on the tiny walls, floors, doors, and the pixelated corridors of DOOM. Foone tweeted a day or so after sharing the GIF on Reddit saying that the processing power of the pregnancy test is probably faster than the original IBM PC that DOOM started on. If you’d like to take a look at that GIF click here.