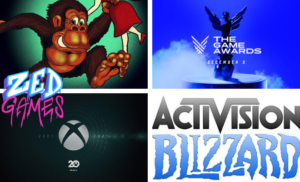 The Game Awards 2021 Announces Game of the Year Nominations –
This year’s Game Awards nominees have been announced, with Deathloop, It Takes Two, Metroid Dread, Psychonauts 2, Ratchet and Clank: Rift Apart, and Resident Evil Village in the running to take the title. Deathloop has the lead for nominations, with 9 in total, while It Takes Two and Psychonauts 2 tie for second with 5 nominations each.
Host Geoff Keighley has mentioned that they’ll be featuring content from 40-50 games in some capacity, with lots to be excited for between 2022 and 2023.
The Game Awards will broadcast live on the 10th of December at 10am Australian Eastern Standard time.
You can check out the full list of nominees here.

Brisbane man raises $7500 for mental health –
In news closer to home, Dr Aaron Raynor spent this Monday the 15th of November at Netherworld in Fortitude Valley, playing Donkey Kong for a 24 hour charity stream raising money for Headspace, a foundation focused on the mental health of youths in Australia. Dr Raynor raised over $7500 by the end of his Kong-O-Thon stream the following morning.

Xbox’s 20th Anniversary! –
Xbox turned 20 on the 15th, with Microsoft hosting a live event celebrating the anniversary. During the live-stream they made several announcements, with the biggest and arguably most exciting being that Halo Infinite’s multiplayer beta would be releasing almost a month early, and is now free to play on Xbox and PC. They also announced a final update to their catalogue of backwards compatible games, with over 70 new additions!
Turning from gaming, they have also shown off a teaser for the live action Halo series that will be coming to Paramount plus in 2022; and a six-part documentary on the creation of the Xbox brand that will be coming to streaming services on the 13th of December.

In the latest news from the Activision/Blizzard case, one of the most comprehensive articles about the case has been published by Wall Street Journal, who are alleging that CEO Bobby Kotick knew about the sexual-misconduct allegations for years before it became publicly known, even going as far as hiding it from the board of directors. Following this article, Activision/Blizzard have released a statement stating that Wall Street Journal have presented a misleading view of both the company and the CEO. Staff have since organised a walk-out, demanding Mr Kotick be replaced as CEO. Click here to check out the full article.