As of July 22nd Microsoft’s streaming platform Mixer will be closing and intends to move existing partners over to Facebook Gaming. This shock announcement means that anyone partnered with Mixer or who streams on Mixer will be transitioned to Facebook Gaming which started on the 23rd of June. Phil Spence the head of Microsoft’s gaming said in an interview with The Verge, “I think the Mixer community is really going to benefit from the broad audience that Facebook has through their properties, and the abilities to reach gamers in a very seamless way through the social platform Facebook has.” All this is designed to compete with Twitch of course by combining the audiences of Mixer and Facebook Gaming they might stand a chance against the streaming giant. For anyone who currently has outstanding Ember balances, channel subscriptions or Mixer Pro subscriptions you will receive Xbox gift card credits. The biggest news of course is what do big names like Shroud and Ninja do since being paid to make the big move to Mixer? It is rumoured that they’ll be able to return to Twitch if they so choose, let’s wait and see what happens. This fund is called the Fairchild Initiative and will support creators and studio that work with PC and console projects. Kendall Davis an advisor for Kowloon said in a statement, “Kowloon Night was founded on the idea of empowering creators to create memorable games and stories, and the Fairchild Initiative carries the same ethos. I am proud to lead this initiative with a focus on empathy, infrastructure, and mentorship.” Any development studio that is majority-owned by black creators who are looking to apply for the grant or seeking further information click here. Cyberpunk 2077 has been delayed again

Cyberpunk 2077 has been moved to November 19th in a statement released from CD Projekt Red saying, “Those of you who are familiar with the way we make games know that we won’t ship something which is not ready. “Ready when it’s done” is not a phrase we say because it sounds right, it’s something we live by even when we know we’ll take the head for it.” They go on to say, “Our intention is to make Cyberpunk 2077 something that will stay with you for years to come. In the end, we hope you understand why we did what we did.” To see the full statement see image below.

In lighter news Cyberpunk 2077 will be getting a comic book adaptation called Trauma Team the series will be published by Dark Horse Comics and is set to release on the 9th of September this year. The comic is said to follow the story of Nadia and emergency medical technician for Trauma Team International, and the sole survivor of a failed rescue mission. She then agrees to continue work on a new mission and she finds herself and her team in an even more dangerous situation. 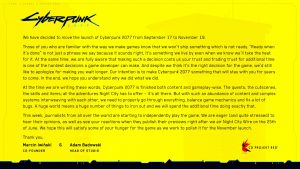