Video gaming developer Valve has debuted the Steam Deck which promises to deliver the ability to play your Steam library portably. That includes AAA titles at a PlayStation 4 quality. Basically, the Steam Deck is a portable and dockable PC, featuring touch pads, a 7 Inch LCD screen with 1280 by 800 resolution. The Steam Deck also is expected to have a battery life from 2 to 8 hours on a single charge. It is, however, also a little on the heavy side weighing in at over half a kilo. The Steam Deck is releasing in the US, Canada and Europe this December at around $540AUS and isn’t expected to release down under until 2022. 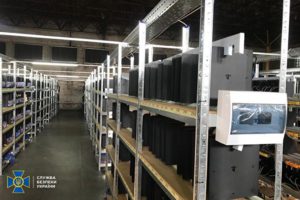 A Ukraine Warehouse Packed with PS4s.

What was thought to be a cryptocurrency farm situated in a Ukrainian warehouse actually turned out to contain over 3800 PS4 consoles that were bot farming FIFA Ultimate Team. There are images showing rows and rows of PS4 consoles with game discs sticking out of them indicating the bot farming. The idea behind bot farming is to grind a certain game thus packing those game accounts with in-game currency and then selling those accounts on the black market. It’s a hefty business making hundreds of millions of dollars a year, and not just with games like FIFA Ultimate Team. EA have attempted to combat this issue over the years unfortunately it’s not always an easy solution. The Ukrainian warehouse has been shut down and out for the rest of the season.

A recent letter sent to investors from Netflix HQ has explained that they intend on expanding into games for the mobile. Netflix is in tough competition with the likes of Disney+ or Amazon Prime, so gaming is expected to give them a competitive edge. An independent telecoms analyst Paolo Pescatore has said, “The company will have to delegate significant resources including time and investment with no guaranteed success.” “For sure this is a long-term play as Netflix needs to strongly think about retention and engagement.” Netflix have also recently announced the hiring of Mike Verdu former EA Vice President of Game Development as well as Bridgerton creator Shonda Rhimes. These moves definitely show that Netflix is serious about a future in gaming.

The Week in Gaming Releases