A complaint posted on Glassdoor reports burnout and crunch at Respawn

Glassdoor is a reviews website where both current and previous employees can share their experiences about working at a company. The complaint was posted by a current full-time employee at Respawn who are the developers of Apex Legends, the post details that the studio was struggling with the negative side effects on businesses relating to COVID-19. A snippet of the lengthy review says, “Mostly every other company has extended project deadlines to accommodate for lower efficiencies and general stresses or anxiety during COVID-19, but not on the Apex project. I feel extremely stressed and burnt out trying to keep our seasonal releases on the same aggressive timeline as pre-shelter in place productivity. I currently work 12 – 13 hours a day and there is no separation between my home and work life.” Chad Grenier Respawn’s Apex game director has acknowledged the studio struggled during the pandemic, he further addresses the complaint on Reddit saying that he insisted that Respawn has always had it’s employees best interested and health in mind however the transition to working remotely was very hard on the team. Over the last month Ubisoft has been dealing with immense backlash from the game’s community over a number of its employees being named as abusers, those employees have either been dismissed or resigned. Ubisoft’s CEO Yves Guillemot has said, “I am determined to make profound changes in order to improve and strengthen our corporate culture. We already have acted swiftly and firmly, announcing, and introducing large scale initiatives intended to transform our organisation.” Yves plans of using a five-part plan to ensure the safety and inclusivity of all its employees. Below is a screenshot for Gamasutra’s report of the Plan. AOC is determined to stop the Army, the Navy and the Airforce from putting its messaging in front of impressionable young people and children, she tells Vice, “War is not a game, and the Marine Corps decision not to engage in this recruiting tool should be a clear signal to the other branches of the military to cease this practise entirely.” The reps for New York’s 14th congressional district filed a draft amendment that should prevent the military from using funds from the House of Appropriations bill to maintain presence on Twitch or any video game, esports, or living streaming platform. The Committee is due to meet this week let’s see how it all turns out. 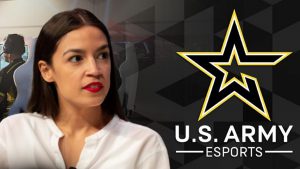 That’s all this week in gaming news.