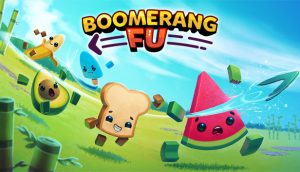 Boomerang Fu is a slice and dice with your friends kind of couch co-op (that reminds me of fruit ninja, maybe that’s because of the fruit characters). With its cute little character design, you and your boomerang must face off other players to be the last one standing. Each round shows off engaging maps that you must manoeuvre in order to survive the wrath of a stray boomerang. This awesome game isn’t much on the story side of things and more of a party game that’s all about local multiplayer madness. Cranky Watermelon is an Australian studio that promised cute cartoonish food related characters and they definitely delivered on that promise, you can play as an eggplant, avocado, banana, a donut or even as a highly caffeinated coffee cup among other characters. 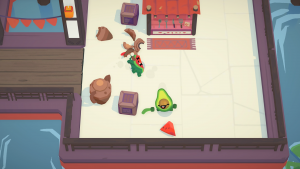 The game play is frantic and fast paced which is exactly what you want in a couch co-op. There are over 30 different maps that have a variety of different interactable elements such as traps, switches that open or close passageways as well as teleporters that can transport you across the arena setting you up for a surprise attack on an unsuspecting player. There are a few different modes with customizable rules just in case you want to slow things down or ramp it up. One of the modes involves teaming up with a pal to take on another group, there’s also a Golden Boomerang mode where you must hold onto the gold boomerang the longest to win each round.

When you first jump in you notice that the controls are really simple and easy to learn as there are only three buttons you need keep track of, dash, throw, and slice. As you play there are more mechanics that you get introduced to such as power-ups that stack together after each round. Some of the power ups are teleport, explosive, fire, ice, disguise, shield and many more. Initially I was overwhelmed by this stacking of power-ups because I felt that I wasn’t clearly instructed on that mechanic and I thought that I might have to alternate between abilities that I gathered so I felt a bit caught off guard when an avocado not only threw an explosive boomerang but one that also split into multiple of them, thus ‘sliceploding’ me into oblivion.

Rounds last somewhere between 5 seconds and 15 seconds making this game one that requires focus in order to win the most rounds. Cranky Watermelon was inspired by games such as Overcooked, Towerfall and Love is in a Dangerous Space Time to give you an idea of what the experience is similar too. Paul Kopetko not only developed this game but also had a hand in the music which has this futuristic, trap electronic music vibe that pumps you up nicely for some boomerang slicing action. My only negative comment to make is that the music is rather repetitive in game and after a while I found myself feeling a bit worn down by the high intensity, especially since the gameplay is already hectic enough, which I guess comes from the Overcooked inspiration. 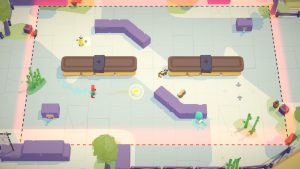 Overall Boomerang Fu is the frantic, fun, and feisty little couch co-op that is ideal for any game loving household, especially if you enjoy kicking your friend’s butts on a game night. Boomerang Fu is also relatively affordable at a little over $20 of the Nintendo E-shop, I played on the Nintendo Switch and I feel this game is designed really well for console, so my recommendation is to play with either the Switch or Xbox One. I really enjoyed my time with Boomerang Fu and look forward too many more nights attempting to make fruit salad out of my friends.