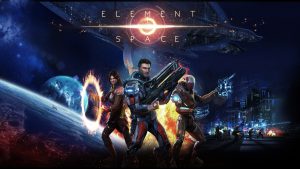 Element Space starts off by introducing you to our main protagonist Captain Christopher Pietham and his two comrades Rafael Guerrero and Jun Zhao. They are situated on-board the star-ship Inspiration which is where the game takes place 200 years in the future. The galaxy has been ravaged by war when several different factions went out to colonise space, for the player the game picks up at the end of this war, with Cap. Pietham tasked to relocate the ship Inspiration to the city of Truce. The ship is going to be the meeting location for the new galactic congress that will start the unification process.

This is however foiled when an underground rogue terrorist organisation known as Tempest foils these plans. Sabotaging the relocation and somehow manages to frame Cap. Pietham, forcing him to go rogue if he wants to save the galaxy and bring Tempest to light! 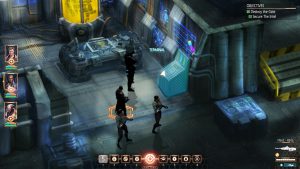 The game-play in Element Space will very much remind you of games like Xcom, however, like the developers themselves the stats are not quite the same. While Xcom is very much a numbers game, maximising your percentage chance of success. Optimising your team to be the ultimate task force, Element Space takes a different approach. Here you only have 3 different chances, you’re either going to hit, miss, or 50/50. This is because of their cover system being based on either full cover, partial cover or no cover. This makes the game more about tactical positing and line of sight rather than getting the best type of percentage. Also did I mention that in some cases your cover can be destroyed?! This makes the playing field dynamic where the best cover is constantly changing dependent on how you or the enemy is tackling approaching the situation.

I do have some grips however, such as finding UI text stretching out of place and being able to speed up some dialogue but not all the dialogue. While these might be small things in scope of things, it did make the game feel less polished which is a shame because overall I really did enjoy it the experience. While you can say that the game is a bit watered down in terms of combat, which I think is one of it’s strengths, it features a story that is straight out of a Mission Impossible movie which pulls you in and sets the premise for some very interesting world exploration. This is really highlighted in the dialogue system which is connected to a political reputation system. This make you really think about what you want to say to different characters because that may effect your image. 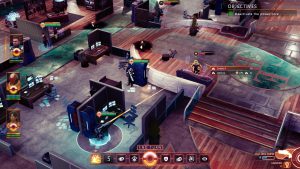 I played this game on the Ps4, without headphones which could have has an impact on some of the visuals, however, overall I found the soundtrack to be really nice! It is your classical space adventure mixed with some action techno beats. The sound effects also sounded really on point, almost too much. During one of the cut scenes they were so loud I could barely hear the dialogue. The voice acting for the game is very well made, really bringing the characters some personality. This was paired with some very corny dialogue which both had me giggling when I probably shouldn’t have. Which is a really nice change of pace considering how serious so many games are in their tone nowadays. 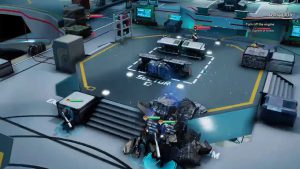 Overall Element Space is a really nice turn-based tactical RPG, I wish I could go more into the political system or the diverse cast of cultures the game has but I wanted to focus a bit on the actual game play. While the game has a couple of unpolished flaws that might make it feel a bit rushed. It delivers it’s core mechanics so well, that I still really enjoyed the game.

The core turn based fighting is very simple yet extremely effective in giving the player a number of different ways to tackle a puzzle. Having simple things like the destruction of cover mixed with abilities and a range of other factors, this is a game to pick up when you feel like testing your brain with some strategic game-play. Element Space is a fun, simple, and feel good tactical experience.