It’s a Sunday morning and you FINALLY get to sleep in… You’re all snug like a bug in a rug, nice and warm in your little blanket cocoon… then *click, cluck, click*… BZZZZZZRRRRRR!! Oh no the blasted neighbours are mowing! Don’t you hate that? But not to worry It’s literally just mowing is SO much more relaxing than waking up to your neighbours clipping grass at 7am on Sunday. In this magical mowing world, mowing lawns isn’t loud, isn’t sweaty, and it’s not even sticky, itchy, or dirty. Surprisingly, the developers of It’s literally just mowing Protostar have made mowing quite relaxing, almost meditative.

I know you must be thinking this is weird given that summer in Australia means you end up having to start mowing the lawns again right after you finish BUT NOT IN THIS GAME! This mowing simulation game is very much set in North America and you get to use ride-on mowers which makes for an easier mowing experience (even in real life). It’s literally Just Mowing is set in multiple different landscapes, varying from community areas and courtyards, to mostly just different people’s backyards. Starting with a brief tutorial that is very easy to follow you begin your journey of mowing the yards of your very first street. Getting the luxury of not only mowing their lawns but also gathering lots of different collectables. Such as cats, birds, bugs, and other cute backyard critters. You’ll know that you can catch something in the backyard by tapping on a white glowing orb that hovers across your screen. For each animal or object that you find they are worth a certain number of gems common collectables are worth less than rare ones which you can spend on unlocking different types of toolboxes where you have the chance to win upgrades to your mower, the driver’s look, you can even pimp out your rims. That’s right, this game contains microtransactions, ads and loot boxes. Like most free to play games their needs to be some mechanic where the developers can make a little cash. Gems can cost $0.99 for 500 up to $49.99 for 32,000. Don’t stress though these microtransactions and so on don’t take away from the overarching experience of the game. It’s Literally Just Mowing focuses primarily on creating a soothing, even mindless experience. You sit on your mower, swiping up, down, left, and right around an over-grassy patch to see it all snipped away as you pass over. During the Christmas break you didn’t mow grass you were sucking up snow that had taken over. There are 74 different collectable items in the game that aren’t just backyard creatures but also old lawn mower blades, seats, tires, and other parts that can also come in multiple colour schemes.

From a sound perspective, It’s Literally Just Mowing is super chill, from the pause menu to the sounds of full-on mowing everything has a gentle hum that is peaceful. You can hear the sounds of a busy suburban neighbourhood, birds chirping, and the wind blowing through the trees. Honestly if you are one of those people that find the sound of rain or white noise calming the sounds of this game will lull you into a relaxed state. 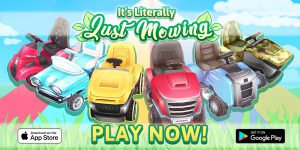 Overall, It’s Literally Just Mowing is a game where you get to zone out. If you can get past microtransactions and ads, you won’t be disappointed. This is the first time I felt so calm to be mowing and I guess that’s what the genre of simulation games is all about, feeding you the reward of doing the task minus the real-world physical effort. There are many other mowing simulation games on the App Store but I have to say after playing this one I feel like I don’t need to look any further for my ride-on gardening needs.