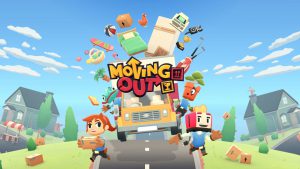 The Smooth Moves Furniture Removalists Company hires you and your friends to move furniture. Moving Out is a game about, you guessed it, moving furniture out of houses with friends. Set in a small town featuring 30 main levels or removalist locations you must hone your ability to move things quickly and efficiently. Being a game heavily focused on cooperative play there isn’t too much story to dive into however the dialog between characters is rather comical, pulling out jokes related to how much they broke while moving or the irony of certain situations you come across. Moving Out has a similar art style to Overcooked with sweet 3D animated characters that strangely make me think of the children’s animated series Noddy Toyland Detective. It also takes loads of influence from the 80’s making this game feel a touch retro giving shout outs to 80’s films like Ferris Bueller’s Day Off. 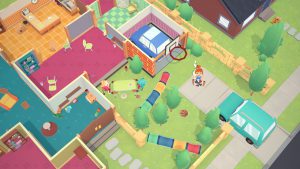 Once you are well and truly in the game you discover the main objective which is – How fast can you move out? Using a tiers system consisting of gold, silver, and bronze, gold being the fastest time and bronze being the limit for progression (meaning must attain at least bronze on each level to progress further). There are also extra achievements for each level such as ‘don’t break ANY glass’ or ‘break ALL the glass’. From a mechanics perspective you must pick up appliances, tables, beds, and other such household items then carry them to your removalist truck. However, that is easier said than done (even in real life). Some of the items require you to have a second person to carry such as a couch or may be someone needs to distract a disruptive turtle that is running around preventing you from getting to the truck. Also, your player movement is not smooth, meaning it requires some concentration to get yourself where you would like to be, and not to mention the art of loading the truck is a game in of itself. 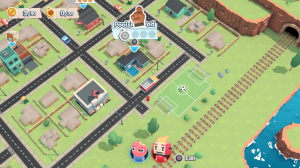 The controls are simple making it easy to learn and designed in a way that anyone familiar with consoles can get the hang of quickly. You must jump, grab, throw and even slap your way to victory. The game requires teamwork and coordinated planning to get the shortest times and obviously the more players involved the easier it is not to mention the strategy needed to deal with awkwardly shaped objects like L shaped lounges or pinball machines. In saying that more players can also mean more yelling!

As you progress further into the game you are no longer just moving people out of homes rather experiencing weird obstacle courses where you are trying to move items across sinking platforms or chasing chickens and pigs. Just as you start to get the hang of it the game throws a curve ball, similar to Overcooked in its design catching you off guard and increasing the level of strategy needed to succeed. My only point of criticism is I wish there was an online mode as it currently only allows for local play so if you’re looking to play with friends in different places I wouldn’t recommend. 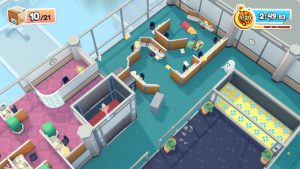 Something that is really considerate is the ‘Assist Mode’ which gives you as the player to ability to choose which elements of play are too difficult if you are finding the game play too challenging and you’re simply not enjoying yourself. This may have come about from previous developments by SMG Studio such as Overcooked which had a pretty steep difficulty curve after a certain level.  This ‘Assist Mode’ is a really nice touch meaning that if you have friends or family that aren’t used to console games this allows things to be extra easy for those learning. I personally feel really cared for by the developers with this feature. 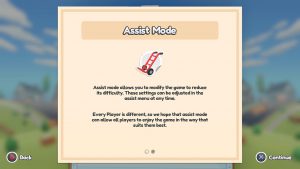 The soundtrack for Moving Out is always keeping you in a good mood. It’s really hard to be mad at your friends when you’re so busy grooving out to some awesome 80’s vibes. You may even recognise the songwriter Lenny Macaluso known for co-writing the song The Touch with Stan Bush in 1986. In 2019 Lenny joined forces with SMG Studio to deliver you the best body moving tunes while your moving homes.

All in all, it feels awesome when you execute a plan and achieve the time you set out for, or when you collaborate before attempting a level for the 100th time. Moving Out is moreish, and an exhilarating way to bond with housemates, provided you don’t swear at them too much. Moving Out is so much better than actually moving out and I recommend this game to anyone who enjoyed Overcooked or enjoys a classic couch co-op that anyone can play. 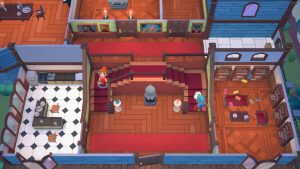 Reviewed by Evie Gibbons @eviezgames on 6th May 2020