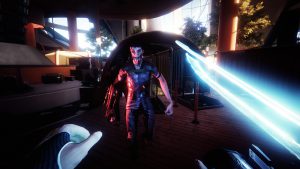 You wake up from cryo-sleep, it’s dark, with flashing monitors. A gentle voice speaks out to you, from PAMELA, a benevolent AI, who explains. Her city, Eden, a utopia where petty crime was a rare event, has fallen. Her people infected by a horrific disease. They tore each other apart, tipping a paradise into darkness.

But you are her hope. A human free from the disease, kept in stasis, she has woken you up to find out what happened, and to put an end to it.

A first person survival horror game, P.A.M.E.L.A. forces you to keep moving, keep seeking, and to keep on alert. With the dark atmosphere, minimal information, and constant danger, this isn’t a game for the faint of heart. 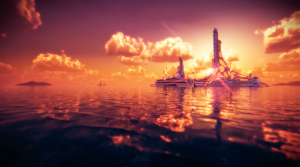 P.A.M.E.L.A. will tell you the controls, and a bit about the items you find, but it doesn’t hold your hand. And it can be quite brutal. Every encounter could be your last.

With dozens of tools and resources you can find and utilise,it takes everything you can to survive. You’ll have to look after your thirst and hunger metre, but also the electricity in the buildings you explore. Resource management is an extremely valuable skill. You’ll also find yourself hacking, scavenging, hiding, and fighting. It’s a lot to keep track of.,

But even when you die, the respawn system allows for you to upgrade and improve your character. With time you can unlock new areas and their cryo-pods, so you don’t lose as much progress, and the game encourages you to keep going, with tantalizing bits of information giving you insight into what happened, and just who PAMELA is. 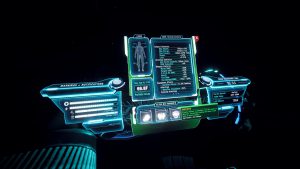 The audio experience is quite minimal, it’s very quiet, except for when it isn’t. That’s when I know it’s time to be cautious. Muttering and heavy breathing signals that I need to start coming up with an alternative route. Heavy metal footsteps make me jump, but these are more subtle sounds. I find myself relying on my ears more than my eyes at times. It’s a very tense experience. And the music that does play is to highlight the environment, and what you’re seeing. 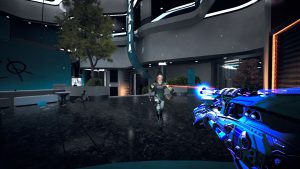 Upon my first attempt, I was confused, overwhelmed, and just a little bit terrified. My first death was sudden, and took me by surprise.

During my second attempt, I had a better idea of what I was doing and what I needed to do. I went even further than before, and became more confident in my actions, but also more cautious: fighting was something to avoid. This death honestly hurt a bit, but I was determined to do better.

During my third attempt I had found my stride, figured out the pattern, and I was making speedy progress. Not all of it was lost, but I had to keep pushing forward to keep the game moving. I had set goals for myself, making more cautious decisions, even taking the effort to find a safer detour if an enemy was in my way.

I was having fun, enjoying the story, and I needed to find out what exactly had happened. I was hooked. That’s not to say it is a perfect game, I ran into frustrating glitches with the UI, enemies pathfinding was laughable at times, and some minor controls would just stop working and sometimes I felt like I was play-testing.

But, it is a very compelling game, and I find myself thinking about it a lot. Bugs aside, it’s easy to see why fans of the game are so devoted to it. It’s interesting, challenging, and a very rich world, all for you to uncover.

Now, one of the things I’ve noticed is that the team are constantly updating this game. I actually had a very frustrating time with bugs on my first run, but within a week a lot of those bugs were resolved with an update. This is a studio that cares about the health of their game! 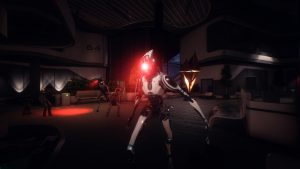