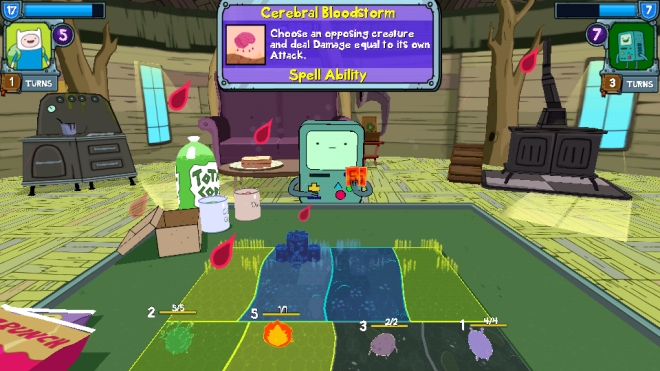 ‘Card Wars’ was originally an episode of the Adventure Time cartoon parodying collectable card games like Magic: The Gathering. In that episode Jake the Dog perfectly summed up Magic: “It’s a fantasy card game that’s super-complicated and awesome but, well, it’s kind of stupid.”

Now there’s an app that lets you play the actual game as seen in the show, which is an idea that’s simultaneously dumb and brilliant. Thanks to the popularity of video games like Hearthstone, those mechanics are everywhere – it seems like every fantasy setting has its own virtual card game where you summon monsters that crawl off the cards and onto a digital tabletop – and ripe for making fun of.

Just like the show half the humour comes from how dopey the cards are, with rarer cards depicting powerful volcanoes and giant monsters while the common cards are creatures like the Wandering Bald Man, who can be summoned in the Useless Swamp, or the seemingly pointless Pig. On your turn you spend magic points to play cards, which might be creatures to plonk down on the landscapes that make up the board, buildings that power up your creatures, or spells that can harm or heal directly. Your creatures have special abilities activated by turning them sideways, just like ‘tapping’ in Magic only here it’s called ‘flooping’. Yes, you can floop the Pig. Then those creatures go to battle. 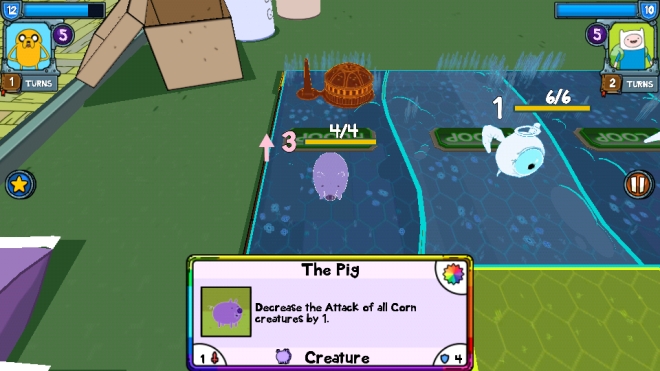 Card Wars is purely single-player, pitting you against characters from the TV show who each have their own decks requiring different strategies to beat – Princess Bubblegum is especially tough. No, really. She can heal creatures on her turn but if you have a high enough attack value to defeat them before that she’ll cast Cerebral Bloodstorm, which turns your own attack value against you. It gets surprisingly tricky, eventually requiring complicated deck-building tactics and crafting new cards by sacrificing old ones.

One way to make it easier is to turn on an optional tap-the-screen minigame during combat, which will give you a huge advantage if you get good at its timing. Unfortunately, it’s not always responsive and sometimes doesn’t register your taps at all. The other way to make Card Wars easier is to spend gems on random cards with a higher rarity than the ones you earn through play, and if you guessed that gems had to be bought with real-world money you’d be right. You also need gems to refill your stamina hearts – it costs a heart to play a match, although they regenerate over time on their own. If Card Wars was a free-to-play game you’d expect things like that, but it’s $4.45 in the Google Play store. Squeezing you for extra money in a game you’ve already bought isn’t on. You even need gems to reshuffle discards back into your deck once you run out, otherwise you take damage equal to your level each turn. You can lose a match by not spending money.

That’s going to be a dealbreaker for most people, but even if it wasn’t there’s another problem with Card Wars. Apart from the cards having funny names, the other thing that made the episode work was how outlandish their effects were, with volcanoes eradicating half the board and the entire flow of battle changing based on a single floop. In this version even the cards that are directly translated from the show have reduced and balanced effects. That volcano only destroys a single lane, and flooping the Pig is far less dramatic. It’s more fair but less funny, and stops feeling like a parody of Magic and games like it and more like a straightforward copy of them.