Halloween in Australia is weird. I’ve only had kids come to my door in costume twice, but people love to complain about how this American holiday has invaded our calendar. White Australians complaining about cultural imperialism is odd, right? Kind of tone deaf and crass? Christmas isn’t any more Australian, and we mainly use Halloween as an excuse for adults to dress up and get drunk anyway, like we do every other holiday.

The Costume Quest games are an insight into why Halloween is such a big deal for Americans, letting you play a gang of kids dressed up in dodgy outfits – a robotic suit made of cardboard boxes, a superhero costume that’s just a blanket cape and a pair of underpants on the outside – who are given free rein to roam the suburbs and pretend to be heroes and monsters while eating all the sugar. Those suburbs, by the way, are being invaded by aliens under the cover of Halloween and only you can stop them. Adults won’t believe that big green weirdo is a Grubbin from the planet Repugia and not just someone in a better costume than you, and anyway, you don’t need adults to stop them when you have The Power Of Imagination. When the kids encounter enemies there’s an anime-style transformation sequence and you become gigantic, cool-looking versions of whatever you were dressed as, while the enemies also shift to become towering behemoths that loom over the tiny houses beneath them. There’s no explanation for this and there doesn’t need to be: it’s Halloween magic. The grown-up superhero you’ve transformed into can throw a bus at bad guys because of course she can.

The battles are straight out of a JRPG or Paper Mario. In the first game your attacks all worked differently, some requiring button-mashing or flashing up a random thing you had to press, while some would just work without any quick-time jiggery-pokery whatsoever. The sequel streamlines that: all normal attacks and blocks require precision timing; special attacks just work. A downside to that streamlining is that the fights, which in JRPG tradition there are too many of, get boring pretty quickly. Another new addition is that you have to drink at a fountain to regain health rather than getting it back automatically, which adds some backtracking. 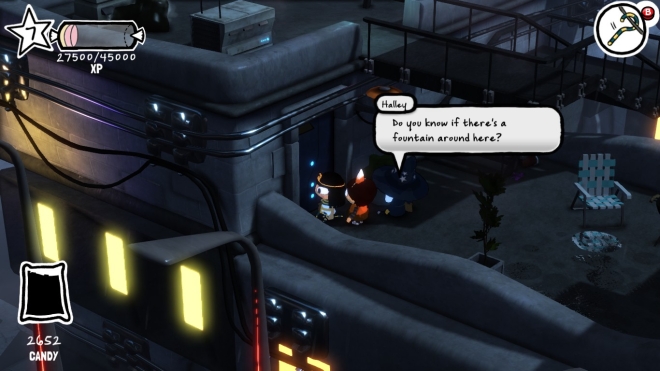 Collectable cards with power-up candy on them called Creepy Treats give you the ability to change things up, but it’s periodically unlocking new costumes that really refreshes the fights and makes you want to keep playing. As well as new attacks many of them have abilities you can use outside combat to solve puzzles with. The pterodactyl’s wings flap away debris blocking your progress, the ghost lets you turn invisible, and the Thomas Jefferson costume – did I mention how American this game is? – lets you diplomatically charm people. All the outfits come with rollerskates this time, like the robot from the original. That’s good because, like everyone, I wore the robot suit the entire game just so I didn’t have to walk everywhere at a child’s pace.

While I was rollerskating through the first Costume Quest, doing sweet jumps and bashing the scenery to find hidden candy, I started to suspect maybe there were no aliens. What if the entire story was a game of let’s pretend and those battles were the fever dreams of sugared-up kids? Costume Quest 2 blows that theory out of the water pretty quick. This time you’re saving Halloween from an evil dentist who hates candy and wants to banish it from the world using an army of Repugians he’s freed using time travel somehow. The plot’s pretty shaky to be honest, but the way you interact with adults and literally travel through time makes it plain this isn’t an imaginary story, except in the sense they all are.

In the opening minutes you go from an alien dimension to a suburb covered in fake cobwebs to a swamp in the past. It never really settles on a location to evoke the way the first game did, with its Tim Burton streets, bustling mall, bobbing for apples, and creepy circus on the edge of town. There’s a dystopian future to explore later on but that’s the default setting of a million video games. The further away Costume Quest 2 gets from its distorted October 31st version of normality the less charm it has. Like a bag of sugary treats the first taste was best, and going back for a second helping will just make you feel queasy.