For the first 15 minutes Daylight had me hooked. Waking up in a dark, abandoned hospital with only a handful of flares, glow-sticks, and a smartphone for light, a spooky voice on the other end of that phone, and no weapons to protect myself from things scurrying around in the shadows? That’s a fine setup for a horror game, immersive and eerie. But Daylight revealed its rules too quickly, and once you’ve seen behind the curtain and know how a game works the intrigue drains right out of it – especially if it’s content to just repeat those rules until it’s done.

Here’s how it goes: each dark location is a series of rooms dead-ending at a mystical lock that can only be opened by a sigil, which is an item imbued with personal significance – perhaps a doll, or a Bible. The sigil won’t appear until you find six clues (called ‘remnants’ by the game and your friend on the phone), which are scattered notes that might be hospital administration papers, newspaper articles, or diary fragments, all slowly contributing to a convoluted backstory.

Once you’ve collected the remnants, revealed the sigil, and opened the lock you move on to a slightly different set of darkened rooms to do the whole thing again. And again. That’s the entire game. Impeding your progress and providing Daylight’s one bit of excitement are those scurrying things in the shadows: ghosts. Old-world ladies in bonnets with empty eyes and mouths, they can kill you if they get too close, but are driven away by flares. While everything else is diluted by repetition – sometimes when you enter a room furniture moves, you hear a distant scream, or a light flickers, but their regularity quickly reveals these events are randomised and harmless – the ghosts’ appearances become scarier through anticipation.

A meter shaped like a moon slowly fills up at the bottom of the screen, and the fuller it is the more likely ghosts are to appear, sometimes chasing you, blocking your path, or briefly drawing you into an alternate world where all the doors are locked. Once you’ve found a sigil they appear even more frequently, but carrying that sigil prevents you from using flares (like a lot of things in Daylight there’s no reason for that rule, you just have to go with it), and you’re forced into a panicked run.

Your phone shimmers with static around the ghosts, and they chatter creepily as they pursue you. Knowing they were coming filled me with dread, and that eventually overcame some of my annoyance at Daylight’s reliance on a strict and absurd formula. 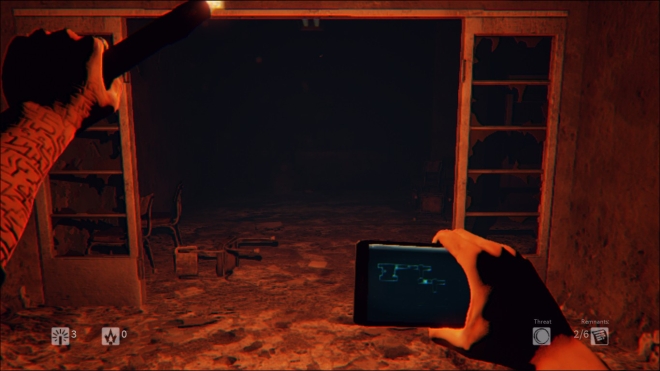 So it does manage to be scary, but that’s the minimum we should demand from horror games. Their mysteries should be worth solving, their locations worth exploring, and their characters worth interacting with – that’s what makes it worth subjecting ourselves to fear. Daylight doesn’t pull of any of those things, mostly because of its reliance on procedural generation. Rather than a sequence of designed areas it’s made out of shuffled, interchangeable rooms, with a few scripted puzzle bits in between that involving moving and climbing on crates, flicking switches, and other standard fare. Replay Daylight and parts of it will be different – rooms in a different order, maybe a cat meowing instead of a woman screaming – but not enough to be worthwhile.

Even if it did shake up a second run through Daylight’s three or so hours, it still wouldn’t be worth the cost to its verisimilitude. The protagonist’s shrieks are also randomised, meaning she complains about how dark it is and asks if anyone’s there repeatedly and sometimes at ridiculous moments, like after you’ve turned lights on or when a ghost’s standing right in front of you. The rooms appear in unbelievable layouts, multiple information desks or maternity wards repeating. And the notes, spare glow-sticks, and flares are scattered about in ridiculous places, with no reason for being where they are. If you’re the kind of player who livestreams horror games on Twitch, the audience can participate in your game of Daylight by typing certain commands: “scream” or “meow” for instance will trigger the relevant noise (sometimes). But that means those events have to be able to occur practically anywhere, without reason. You’ll never find out who is screaming or see that damn cat because they’re just spooky things that happens because they’re spooky. Daylight keeps reminding you you’re playing a game.

Where a game like Amnesia: The Dark Descent was inspired by the fiction of H. P. Lovecraft and Slender: The Arrival from the Slender Man mythos, Daylight draws all its influences from other video games – primarily Amnesia and Slender. It’s full of things that “just are” because that’s the way other games do them, and even though it’s frightening the scares are all second-hand and embedded in a framework that goes out of its way to shatter your suspension of disbelief.