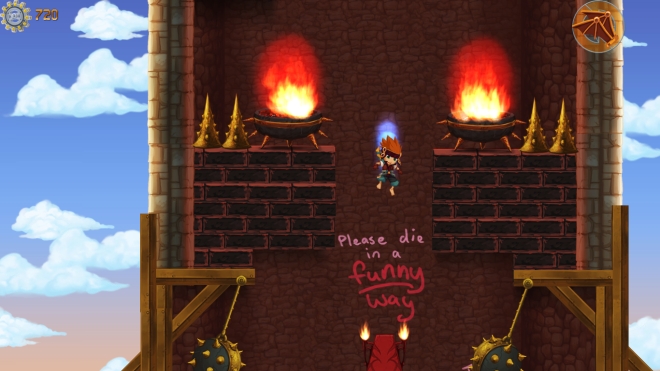 Most 2D platformers are about jumping across the screen from left to right; falling down a hole is a Very Bad Thing. In Freedom Fall you’re escaping from a prison at the top of a tower so you spend a lot of time doing the thing you’re not supposed to: leaping blindly downwards. Then you steer yourself past spikes, swinging blades, electrical arcs, and fires by bouncing off the walls (there’s no falling damage so at least you don’t have to worry about that).

In the archetype of typical left-to-right platformers there’s also a princess to rescue at the end, but in another cute inversion Freedom Fall has the Princess as the villain. She’s a brat so spoilt her father let her fill a tower with traps for fun, a deadly dollhouse where you’re one of her toys, only instead of marrying Barbie you’ll get eaten by a giant robotic shark. The Princess taunts you with notes written on the walls in pink chalk, explaining how far previous escapees got with cheery arrows pointing at rusty blood on the spikes. It’s a little like the way GladOS humiliates you in Portal only with pictures of lovehearts and flowers to go with each threatening insult.

Tumbling into the unknown is a pleasant feeling, or at least it is with a controller plugged in – a keyboard or touchscreen doesn’t give the right kind of precision for a game where you need to land on narrow ledges, where even touching the side of a spike is instant death. Sometimes you wind up outside the tower, smoothly bouncing off flagpoles and balloons to control your descent, though the balloons also have spiked crosses hanging from them in case you feel too safe. Upgrades, which you buy with nuts and bolts scattered around the levels, also let you control your fall. There’s a parachute, double-jump wings, and a jetboard so expensive you’ll probably only be able to buy it at the end of the game. 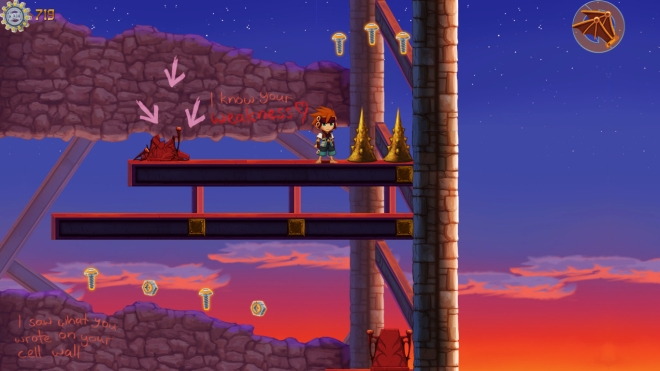 Those notes from the Princess are sometimes borderline helpful, like when she points out which routes are the hardest as if daring you to step up and try them out. Letting players manage their own difficulty like this is a great idea, but Freedom Fall has another idea regarding difficulty and it’s a terrible one. Eventually the save points you’ve been relying on stop working, every second one sabotaged and left in ruins to mock you. Rather than just making the traps harder after a certain point Freedom Fall forces you to replay larger segments with each death, punishing you with boredom as you repeatedly slog through longer and longer easy bits before the bit that actually keeps killing you.

Save points are a sacred thing, and their placement is an important sign of a developer’s care. A game that has them too far apart may as well come straight out and say it’s happy to waste your time; by actually showing you where they should go but breaking them, Freedom Fall adds injury to insult. Up until this point it’s filled with promise, and its twisted sense of humour makes its lesser elements palatable (at heart it’s another of many retro-styled indie platfomers, and there’s a plot branch/moral choice you’ll only be able to explore both sides of if you can make a particular jump). But after Freedom Fall replaces increased challenge with increased frustration it abruptly ends with a tedious boss fight that involves throwing bombs at a dragon till a health bar drains, which is generic as it gets and not exactly playing to its strengths.

Leaderboards and medals for each level as well as bonus levels and multiple endings should add replayability to a game you might finish in two hours, but the final levels leave such a bad taste you might not want to.