The first time I played this remake of Gauntlet I accidentally shot the food within the opening five minutes, so if the only thing you need to know is whether it’s possible to destroy an entire roast turkey with a single, poorly aimed arrow just like in the original, there you go.

Gauntlet is a remake of the 1985 arcade game that gave us one of our first four-player co-op experiences and birthed a bunch of memes about the wizard needing food badly. Arrowhead, the developers of Magicka, have focussed on that arcade multiplayer experience and created a fast-paced action RPG that boils Diablo down to potent stock. The original characters return – Valkyrie, Elf, Warrior, Wizard – but given new powers and more differentiation. The Valkyrie and Warrior fight up close, but she has a shield to block with or hurl like a death frisbee, while he swings an axe in a mob-clearing circle. Playing the Elf transforms Gauntlet into a twin-stick shooter, twanging out arrow hell in a constant spray while you backpedal and drop bombs. The Wizard’s the most radical reinvention, however.

In the same way that they’ve approached the whole game by taking the action RPG formula that evolved from the original Gauntlet and pulling off parts that slow it down, the Wizard plays like an illegal street-racing version of Magicka’s spontaneous spellcrafting. Three of your buttons represent elements: fire, lightning, and ice. You need to press two buttons to select a spell (it’s designed for a controller), so hitting fire twice gives you a basic fireball, fire then lightning an exploding nova, but lightning then fire a short-range zap.

Frantically trying to figure out which of the nine possible combinations you need, accidentally casting teleport instead and finding yourself in the middle of a swarm of spiders – these are the moments that make playing a Wizard special. It’s hard to learn, but when you drop a freeze ball in the perfect spot to help your allies you feel like Gandalf only better. 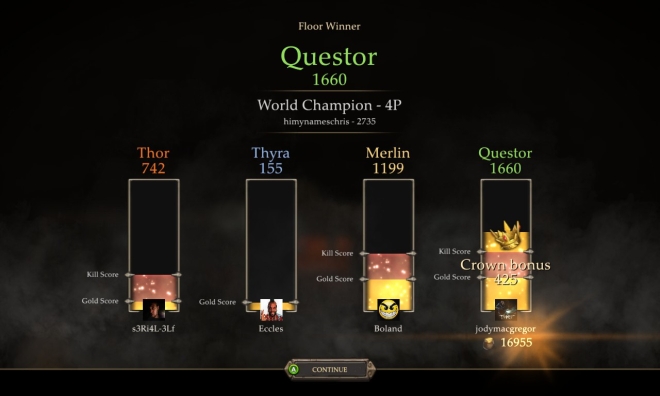 Played multiplayer, Gauntlet is simultaneously co-operative and competitive. When enemies pour out of spawners some of you will whittle down their numbers while others target the thing summoning them, and bosses require teamwork to take down quickly. But at the end of each level the gold you’ve collected is added to the number of monsters you’ve killed to give a personal score, pushing you to grab the shiny stuff before other players.

Some monsters wear a crown that can be looted, but will be knocked off your head when you take a hit, allowing another player to grab it. Finishing a level with the crown gives a huge bonus to your score, so you find yourself hovering near the player wearing it, just waiting for them to be hurt so you can dive for it. The balance Gauntlet encourages between co-operation and rivalry is perfect, whether you’re shouting at friends on the couch or playing in enforced silence online (there’s no in-game chat, text or voice). 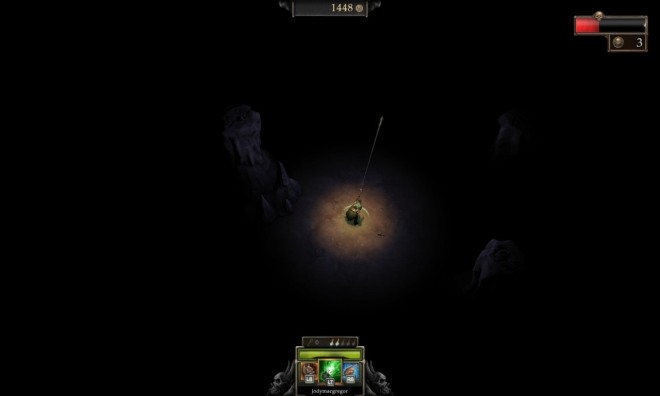 There’s a lonely solo mode, but some classes are better balanced for it than others. As a snack-sized thing it can be fun, but Gauntlet is obviously intended for groups. Every compromise games like Diablo or Borderlands make for the sake of having it both ways is eroded in favour of taking the speedbumps out of multiplayer. Cutscenes are miniscule, there are no quest-givers to click through conversations with, and no inventories to fuss over. A shop accessible between chapters lets you buy relics – limited use power-ups like shoes that leave a trail of fire or a lute that soothes monsters when strummed – but it takes seconds to look at rather than agonising minutes.

It can take a fair while to get a full party together if you’re playing with random strangers, perhaps because you can only take one of each character and some people only want to play their favourite. It’s common for one player to drop out straight away, and there’s no way for a replacement to drop in once an online game’s begun. But once you do get a game going, it’s a blast. Arcade sound effects bleep, monsters die in droves, and sometimes an unkillable Grim Reaper chases you through an entire level. I can’t think of another game that’s made playing with randoms this pleasant, partly because of the lack of chat but mostly because it’s designed that way. I’ve seen people stand by the food waiting for hurt players to eat it so they survive the next fight. Gauntlet must be hell for trolls. The only way to effectively annoy others is by snatching gold before they get to it, which is an expected part of the game and more likely to result in comical fist-shaking than actual grief. On your own you’ll find it short and lacking variety, but with other people it’s a ball.