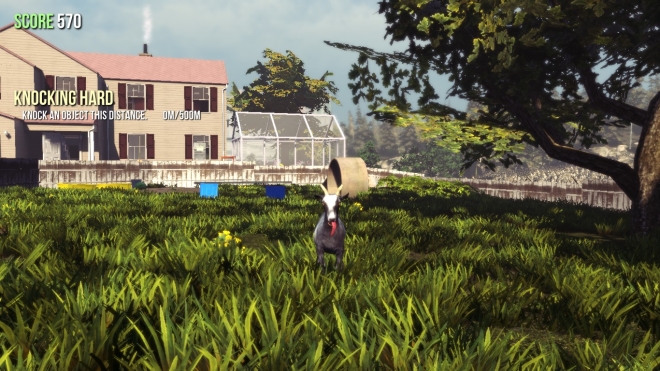 There are people who play open-world games to wreck them: to knock people over, smash stuff, and blow up everything that can be blown up. Some go further than wrecking stuff that’s put there for you to wreck and aim for the edges of the map or the physics engine, trying to glitch past the limits of where you’re supposed to be or how high things should fly.

Goat Simulator is made for those people.

You play an indestructible goat on a rampage in a small town. You can make cars explode by headbutting them, drag objects around by licking them, and hurtle into the sky with even a slight push from a fan, a treadmill, or a fireball that used to be a petrol station. It’s the mayhem part of Grand Theft Auto minus the plot, plus a likeable protagonist. In the absence of story, objectives in the corner of the screen are the closest thing to direction. They might urge you to do a flip or remain in the air for a certain amount of time or find all the collectables. That gives you something to aim for, but the real joy of Goat Simulator comes from setting your own goals – getting hit by a car and seeking revenge, trying to break into the lab where scientists are researching low-gravity, seeing a group of people enjoying a party and finding the most creative way to catastrophically fuck it up. While the map’s small, there’s a lot hidden in it. A jetpack waits for you somewhere in the construction site, the game development studio has a working Flappy Bird clone called “Flappy Goat” you can play, there’s a pentagram where various rituals can be performed, and so on. Getting beyond that map is also possible, either by bouncing on trampolines or hitting the ragdoll button that sends you limp while pushing against the invisible walls at the edge of the world. Sometimes the physics engine catches up when you make it into the low-resolution world beyond the limits of where you’re supposed to be and twangs you back like a rubber band, which is hilarious. Sometimes you just get stuck inside the floor and have to hit the respawn button.

It won’t take long to see everything there is to see, and chasing the harder objectives is more frustrating than fun. But two things are likely to drag you back to Goat Simulator after the initial rush wears off. The first is that it’s built with mods in mind, and once the community starts creating even weirder new maps and goats it’s likely to earn a second wind. The other is that playing Goat Simulator is performative; it’s just enjoyable to watch. A ridiculous number of YouTube videos already exist, and just sitting down a new player for their first go is fun. It’s a single-player game, but you’ll want to get your friends over to make them try this crazy thing, and that’s worth as much as replayability or longevity or making even the slightest bit of sense.