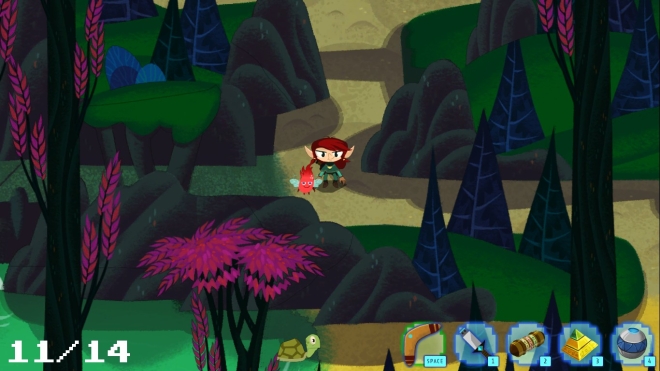 In the Legend Of Zelda games Link spends a lot of time doing the fantasy equivalent of mowing the lawn. He’s constantly swiping at tall grass with his sword while shouting “Hah!” because that grass contains the hearts he needs to replenish his health bar, because video games. In Hack ‘n’ Slash you walk up to a bush, shout “Hah!” and stick your sword in it, but then things get weird. Your sword ends not with a blade but a USB connector and the bush has a matching plug, and when you join the two a text box pops up with a set of variables in it. One of them says “ON_FIRE false”, and you can exchange that “false” for a “true”. As soon as you do the bush bursts into flames with a FWOOSH. Only then do the hearts appear.

Hack ‘n’ Slash is about the other definition of the word hack. 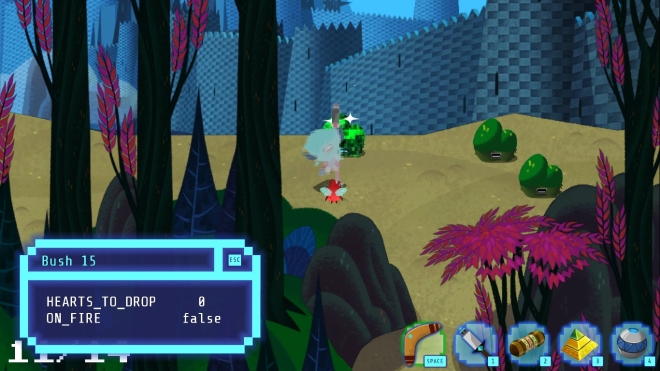 It may be a the story of a heroic elf in a green hood accompanied by a fairy, but that elf saves the kingdom from an evil wizard by reprogramming bosses rather than stabbing their weak spots. It’s a video game about video games, one that lifts the curtain to show that every patrolling guard has a vision cone and an AI routine that can be altered and then lets you tinker with them.

Alice, the hero of Hack ‘n’ Slash, takes discovering the secret magical underpinning of her reality in stride, making jaunty conversation with her sprite companion Bob in speech balloons, again like Zelda. The tone is light and playful and a joy to read, and the visuals have a ‘Ren & Stimpy bedtime story’ quality, rubber-faced animated characters set against picturebook backgrounds. It’s developed by Double Fine, who have made visual flair and comedy their calling cards in games like Psychonauts, Brutal Legend, and Costume Quest. However, the other thing those games have in common is that, while you continue playing them because they’re funny, everything else about them gets to be a bit of a slog. That remains true in Hack ‘n’ Slash. Its early puzzles are mostly about tweaking variables – a spiky turtle can be passed by reprogramming its vision cone to not see you, or its alignment to become friendly – but later puzzles involve messing about with algorithms. Alice and Bob have one of their pleasantly fluffy conversations about this, but don’t really explain anything, and then you’re expected to be able to solve problems involving blocks of code. I kludged my way through a couple of them but then hit a point where my brain gave up, grabbed its little briefcase, put on a hat, and closed the door on its way out.

Maybe it would be easier if you could simply type in alterations to those algorithms and see their effects, but instead you have to travel through a portal to a mechanical otherworld where data crystals representing each argument need to be be individually altered. Learning through experimentation becomes a hassle when every single step involves this much effort, and sometimes you’ll exit the portal to see what your tinkering has achieved only to crash the universe and have to start that section over.

If you aren’t an actual computer programmer, or at least an amateur coder, you’ll get three quarters of the way through Hack ‘n’ Slash and then have to look up a walkthrough. It’s not perfect before that – too many of the puzzles have “figure out what the point of this puzzle is” as their first step, it’s easy to slide off ledges to your death repeatedly, and the inventory only lets you assign buttons to five of the many objects you use – but it’s still a shame to segregate its final act so completely.

If only I could hack it to add a difficulty option that says “I am a doofus who doesn’t know what ‘modulo’ means but I still want to play your intriguing video game, please let me just do that.”