A game like FTL: Faster Than Light gives you basically the full Captain Kirk Star Trek fantasy. Your own spaceship, your own crew to boss around, and an endless supply of enemy craft to hail over the intercom and bargain with or blow out of the sky. Out There is an undeniably similar game of crossing the galaxy in your own spaceship, but it’s a very different fantasy: you’re alone, your ship has no weapons, and your greatest enemy is an empty fuel tank. It’s not Star Trek; it’s a bleak Polish novel about the vastness of space.

The first time I played Out There I realised I was running low on fuel, so I set the course for a gas giant I could probe to harvest hydrogen. Flying to that planet cost fuel, getting into orbit around it cost more fuel, and when I pressed the button to send the probe I discovered that also cost fuel, which I no longer had enough of. I didn’t have enough fuel to refuel. In Out There you don’t get to reload if you goof like this, it’s game over. You press the “give up” button and start again.

I press the “give up” button a lot. 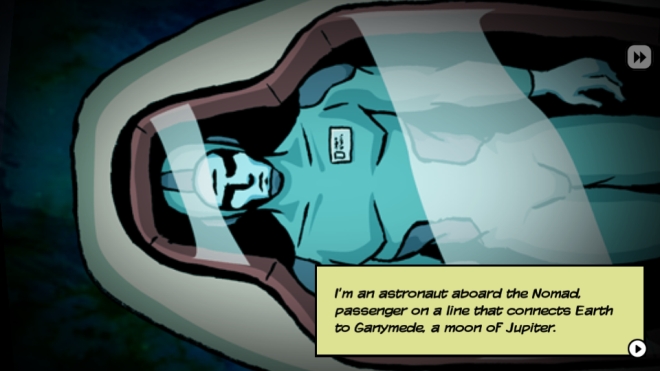 The story’s minimal. You – an angle-faced spaceman who looks like a character from a Jack Kirby comic – were in cryosleep, something went wrong, now everybody else is gone and you’re sitting in a tin can, far from the Earth. A mysterious alien cube puts a starmap into your head and you’ve no choice but to follow it, whether it’s leading you home or not.

Each time you jump to a new system or land on a planet there’s a chance of a random encounter. Like an entry from a pick-a-path book, each one describes your situation in a paragraph of text then has you choose a response from a list of options. Finding a plant-like growth spreading across my ship’s hull and sapping all its warmth, I chose to fly dangerously close to the nearest sun. The growth detached and tumbled away, growing in the heat until its leaves were larger than my ship. As it caught fire, seed pods launched themselves out into the distance. Who knows what would have happened if I’d chosen to fly the other way, out into cold space? There are also aliens to encounter and deal with. With no language in common, at first you’re randomly choosing whether to give them gifts from your precious cargo, but each contact teaches you some more words. Next time their argle-blargle gibberish will have a few words of English in there, like the old French game Captain Blood. Sadly, each time you die and restart all your knowledge is lost.

While there’s a huge variety of weird space encounters with bubbles of antimatter, alien craft about to be sucked into black holes, floating metal cities, and pirates who fire rock torpedoes, mostly what you worry about are the square slots inside your ship for tech upgrades and cargo. You’re always squeezing in as much as possible – especially the iron that repairs your hull and the hydrogen and helium you need for fuel.

The brutal economics of limited resources force you to play it safe and mean you’re always one rough random encounter away from losing it all and having to skip your way through the opening cinematic to try again. It’s enjoyable enough to do that, but I wish there was an easy mode so I wasn’t just dooming this sad little spaceman every time. Sorry, little guy. Planet Earth is blue and there’s nothing I can do.