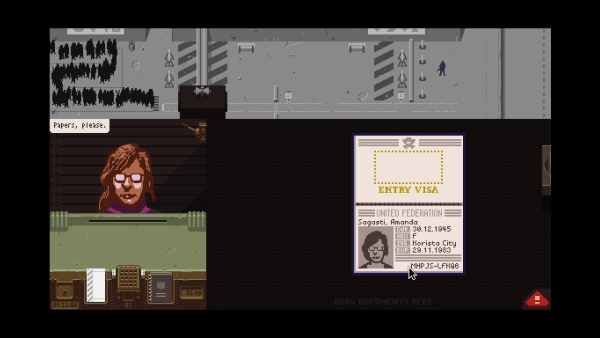 It’s 1982 and you’re a citizen of Arstotzka, an oppressive Communist police state. You work as a border inspector, because even though Arstotzka’s a hellhole there’s always somewhere worse. People want to cross the border into your country and it’s your job to check their documentation.

At the top of the screen you see the border: guards on one side carry guns; on the other a smear of pixellated humanity is backed up for days. At the bottom left those people enter your booth and hand you their papers, their speech balloons complaining about the wait or begging for entry in babbling Arstotzkan, which is a guttural nightmare version of Simlish. On the bottom right is your desk and this, swear to God, is the most exciting place in Papers, Please.

Here, you click and drag passports to compare their ID numbers against entry tickets, check the stamps against those in your little book, check expiry dates, photos, weight, height – a growing catalogue of things you have to remember, each day adding more complications, rules, and regulations. The increasing difficulty is so carefully managed that you’ll find yourself picking up rules as they’re introduced one at a time and then being exasperated nobody else understands them.

“Entry tickets are no longer valid, you need one of the new entry permits instead, honestly, what is wrong with you people?” What makes this paper-shuffling tense is that you’re only paid for people you successfully process across the border before 6pm, and if you rush and let more than a handful of people with invalid papers over you’ll be fined. At the end of each day a list compares your pay to your expenses. Your wife, son, mother-in-law, and uncle all share the same class-8 apartment dwelling and you need to feed them as well as pay the rent and heating out of your rubbish wage.

That family only appear as a collection of statuses, telling you whether they’re cold or sick or hungry. Even without faces or names, I was still so driven to scramble for enough money to keep them well that when corrupt officials, smugglers, and spies started offering bribes I had to consider taking them because I needed to pay for my son’s medicine. And when the sad cases presented sob stories about why they should be allowed across even though their papers aren’t in order – they don’t want to be separated from their family, they’ll be killed if they return to their country – I found myself doing the maths on whether I could afford to help them and still keep the heat on in that class-8 apartment. 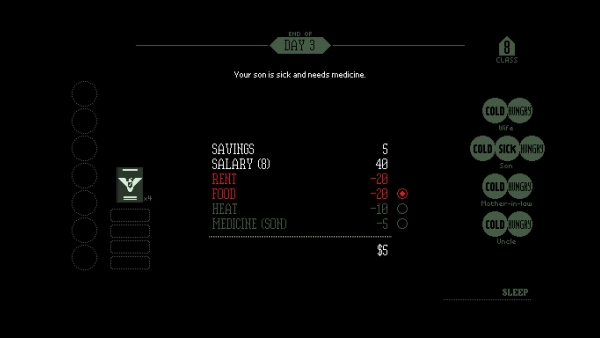 No matter how moral you try to be, there’s still an undeniable rush to catching someone with forged documentation. Realising someone had a passport from a city that didn’t match their country of origin, I’d shout “a-ha!” and feel good, and then think about it and feel bad about feeling good. I started to take so much pride in my ability at paperwork that when I was given a key to the gun cabinet in case of trouble, I wanted to hand it back. I was offered a gun in a video game and I didn’t want it, because I was just a paper-pusher and didn’t want to get killed.

Even if you do get killed, or arrested, or flee the country with a fake passport of your own, it’s always possible to reload an older save and work towards a different one of the many possible endings. Your game’s saved at the start of each day and you can go back to any of them, creating a new branch in your timeline rather than wiping the original. You can jump forward and back and create as many branches as you like, as well as starting entirely new trees. Other games should steal this idea.

Even knowing those saves exist, there’s still more stress in a single day of Papers, Please than plenty of other games. While you’re focused on trying to balance speed with thoroughness and also wondering whether that stranger who left the odd message was an agent of the resistance or a member of the secret police testing you for loyalty, you’ll find yourself carelessly subjecting someone to humiliation or worse because their papers aren’t in order. And then you’ll step back and think about how easily you became a gear in a terrible machine. 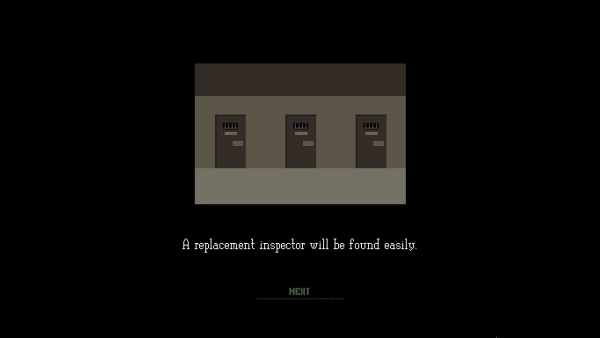