Skip to content
HomeReviewsReview: Sir, You Are Being Hunted The robots in Sir, You Are Being Hunted are more English than tea and racism. They wear tweed coats and top hats, smoke pipes, stalk about on the moors shooting pheasants, talk endlessly about the weather in their whirr-buzz-click robot voices – they’re like characters from Sherlock Holmes made out of brass.

Oh, and they want to kill you.

Sir, You Are Being Hunted is a game of stealth and survival in which you’re stranded on a string of islands with very little to protect yourself, and must gather fragments of scattered scientific equipment to rebuild a teleporter so you can get the hell away. Between you and those fragments are packs of robot gentlemen and their robot dogs, forcing you to crouch in long grass and behind hedges to evade their shining red eyes whenever a hunting party approaches.

You spend a lot of time in this game toggling in and out of crouch mode. Sir, your thighs are getting a heck of a workout. The survivalist element comes in because there’s a vitality meter constantly ticking down and the only way to refill it is to eat and drink – bottles of sherry, flasks of tea, very English sustenance. Every now and then have to light a fire to cook some meat, knowing full well that fire attracts the machines. You need to keep vitality up not just because you’ll starve if you don’t, but because high vitality gives regenerating health – must be all those antioxidants in the tea – and you’ll need that when you get shot.

To scavenge you approach abandoned houses, their owners presumably done in by the robots. As in DayZ you can’t actually enter buildings. Click on a door and a box with everything you can loot appears, most of it probably junk. All the farmhouses and churches are just big crates of stuff really, which is a shame. This is an immersive game, one that makes me hold my breath while hiding in a shrub as a robot in a balloon passes overhead, his spotlight sweeping across the moor. But every time you ransack a building you’re reminded it’s just a game, and one with a budget too modest for rendering interiors. In amongst that loot weapons are rare – though they are available – but things that can be used as distractions are more common. Rather than blowing up robots, it’s sometimes easier to throw a bottle or a rock then sneak past while they investigate. I felt dead clever when I set an alarm clock to go off in 30 seconds, then scurried around behind some boulders so that when the nearby robots went to check that alarm out I could get past them to grab that fragment they were guarding.

At which point I had to spend precious seconds playing inventory Tetris.

You’ll need to carry food, matches for lighting fires to cook food, distractions, weapons, possibly ammunition for those weapons, binoculars, and if you’re lucky a map. Maybe you find a torch, or some bear traps, but everything takes up space and there’s not very much of that. The fragments can be huge, using up almost half the inventory, and that means frequently ferrying them all the way back to base camp – a stone circle where you rebuild the teleporter – before setting off for the next. There’s a lot of back and forth. 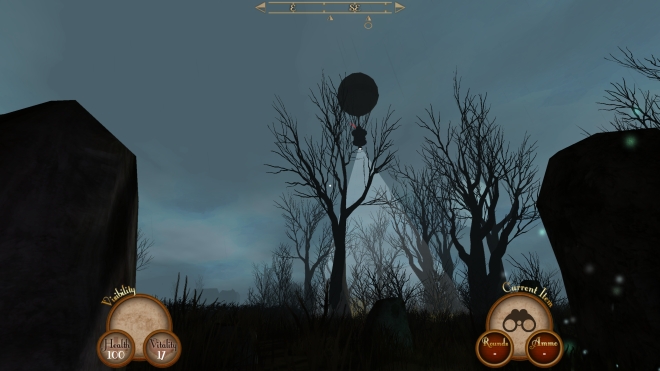 Very tense fetch quests, though. The only save points are at the standing stones and the boats that connect the five islands. Die, and you may have to go back a fair way. Whether the potential added fear of death is worth the added frustration of retreading steps when you do die – especially when those steps are taken in a slow crouch – is questionable.

More frustratingly, spread-out save points punish experimentation. After finding a toy train I set it off while hiding behind a tree, expecting it would lead robots away from my hiding spot. It trundled 10 centimetres while tooting up a storm, drawing the murderous machines directly to me. Bang, dead, reload five miles away. There’s wasted stuff in my inventory I still haven’t tried, things that could be fun but which I’ll only ever use if there’s an opportunity near a save point.

Finally, there’s procedural generation. Like the excellent Don’t Starve and the terrible Daylight, the map is randomly generated afresh each time you start a new game. As those games prove, sometimes it works and sometimes it doesn’t. But if the promise of procedural generation is games that surprise us, the layout constantly throwing up odd new combinations, then that promise is a bit of a lie. What happens is you quickly recognise the building blocks and then each time the random number generator tosses them out in a slightly different configuration you treat them the same. Here’s a burnt-out ruin that will have a barrel of loot in the same place the last five did, here’s another perfectly straight ditch with water at the bottom. 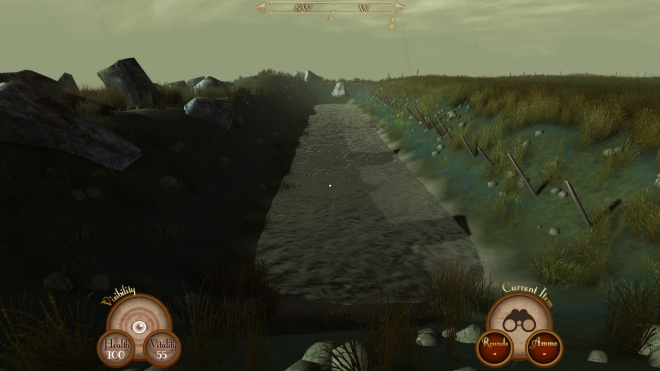 Well, yes. (Although I haven’t complained about how blah the voice actor portraying the lab assistant is.) Sir, You Are Being Hunted has a great central conceit, and I love listening to the robots complain about the weather and sing ‘Rule Britannia’ even though it means getting dangerously close to them and hearing their repeated beeps so often they’re stuck in my head. And there’s a definite sense of escalation as you collect more fragments, with new varieties of the mechanical bastards appearing so that treks back to the standing stone become more and more dangerous.

But when I die I often ragequit and go do something else. It’s a game I have to play with a soothing cup of tea on hand, which at least fits the theme. Maybe I need a pack of calming chocolate bikkies to go with it.