Skip to content
HomeReviewsReview: The Rapture Is Here And You Will Be Forcibly Removed From Your Home 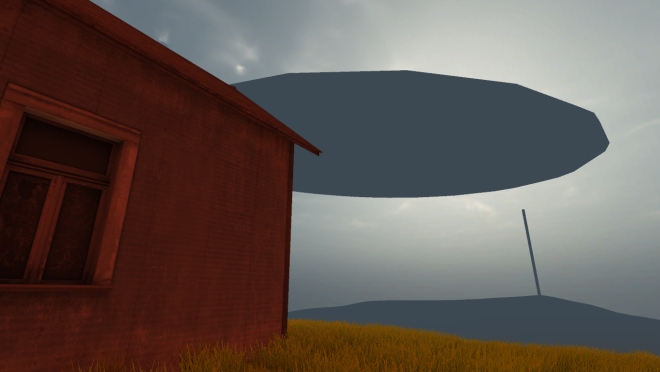 “Why would you play a game where the world ends no matter what you do?” Candi asks.

“It’s like building a sandcastle on the beach,” I try to explain. “You know the tide’s going to come and wash it away but it’s still worth doing.”

“My sandcastles never lasted that long,” says Ray. “They always got kicked over first.”

The Rapture Is Here And You Will Be Forcibly Removed From Your Home is a game about the end of the world. You have roughly 20 minutes to explore its lonely landscape of hills and forest while a gigantic circular object slowly fills the sky, looming over you like an angry parent, and then it ends. Game over; world over. That’s that.

During your last minutes of existence you can see some stark and lovely sights – abandoned buildings, fog-covered grass, distant dark pillars like the bones of a nuclear power plant – and it’s all pretty impressive for a free game created almost entirely by one guy. He did have help from a few voice actors, who provide snippets of narration you trigger by walking through towers of coloured bubbles rising into the clouds, the words taken from stories by horror author H. P. Lovecraft like The Call Of Cthulhu and The Shunned House. Lovecraft’s work has inspired plenty of video games, but normally by providing tentacled enemies or unpronounceable names for boss monsters or gods for generic cultists to worship. It’s weird that his stories about fear of the unknown have been used as a simple catalogue of names and enemy types, becoming so known that they’re clichéd. The Rapture Is Here gives his stories back some of their impact. While listening to his wilfully overwrought prose being read by, frankly, a bunch of amateurs, you’re trying to find some connection between the pieces chosen and the event you’re witnessing. The egg in the sky hums when you look at it, seems to be growing or descending as you watch. It’s implacable and unstoppable and utterly unknowable. It’s not tentacled or squamous, but it’s definitely Lovecraftian.

The time limit makes The Rapture Is Here frantic. Holding down shift you run from place to place while thunder rolls and ominous music, like something from the BBC Radiophonic Worskhop or Jeff Wayne’s War Of The Worlds, works towards a crescendo. The climax is a little underwhelming – a build-up of strange visual effects and then it simply stops, dumping you back to the menu even if it was mid-narration. The end of the entire world can’t really help but be anti-climactic, and at least it doesn’t end with a big kid’s foot crushing it all.

The world’s going to end some day, and whether that’s a billion years from now or tomorrow, an atmospheric mood piece like The Rapture Is Here isn’t a waste of the time you’ve got left.