In a good stealth game a level ends in one of two ways: either you’re sneaking out, job complete, and nobody knows you were even there, or you’re piss-bolting for the exit while the alarm rings, chased by every single guard. Either one is satisfying. Quiet or noisy, it’s your actions that created the situation; a story you own.

That was how the original Thief games worked, but this reboot of the series has less faith in you. Missions frequently build to a cutscene in which you watch this new version of master thief Garrett do something exciting, and then get thrown into a contrived, artificial climax. You might be trapped in a small, dark area with guards on high alert like a predator sequence from the Batman: Arkham games, or chased across rooftops by dogs, or dumped into a boss fight. It’s as if Thief doesn’t trust you to enjoy yourself unless it’s showing off.

Those are how Thief’s story chapters play out, but there are also optional missions to discover and that’s where it’s at its best. Away from all the cutscenes, bland dialogue, and a plot that wastes its most interesting ideas a better stealth game is hiding in the shadows. Here, you’ll be devising your own way into heavily guarded locations – perhaps climbing to an open window, or waiting for the perfect moment in the guards’ patrol routes to quickly pick a locked door, or clobbering them over the head and piling their bodies in a corner. Then you clean the place out, watching Garrett’s hands swipe shiny things in pleasingly tactile animations as he nabs every item of cutlery and pair of scissors in sight. To avoid interior guards you might distract them by throwing bottles and shooting arrows, or duck from shadow to shadow using a ‘swoop’ move that lets you glide forwards with a lunge and that whoosh sound cloaks make in movies.

And whether you pull off the perfect invisible ghost run or set off an alarm – perhaps by moving too quickly past one of the many caged birds everyone seems to own, or opening a door without peeking through the keyhole to check the house’s owner isn’t on the other side – the ending you create is yours.

These client jobs are found in a between-mission labyrinth of narrow streets that make up The City, Thief’s grimy steampunk setting. Unfortunately, The City isn’t fun to explore. Each suburb is separated by a chokepoint where you have to tap a button repeatedly to lift a thing blocking your path, because that’s less boring than a loading screen apparently. Also, many of the beguiling rooftops are inaccessible because you can only climb when Thief lets you. Among Garrett’s arsenal of trick arrows are ones that let down a rope, but they can only be shot at specific marked beams. Garrett’s climbing and jumping are also only allowed in certain spots. Sometimes you’ll try to jump a gap or grab a rope only to casually drop off the ledge instead. Again there’s that feeling of distrust, as if you can’t be allowed your own jump button in case you misuse it somehow. The streets are heavily patrolled, in some suburbs by the Watch and in others by gangs, all of whom seem to know Garrett by sight. Their scene-setting conversations about how much they like coffee or hate the plague follow you even further than they do. They can be heard repeating the same lines of dialogue blocks away, and sometimes they glitch and repeat over the top of themselves as if they’re singing a round. During the brothel level the sound of a man begging to be slapped by a dominatrix pursued me through a wall, around a corner, and up a flight of stairs at full volume.

In a stealth game where you’re often in the darkness relying on audio cues to tell you what’s going on, good sound design is essential. Thief even gets it wrong in cutscenes, with dialogue sometimes inaudible or buried under the sound of background characters repeating their one-line barks.

The other genre where sound is this important is horror, and Thief tries its hand at that as well with a level set in an abandoned asylum. It was a tradition for the original Thief games to suddenly get scary halfway through, and Thief: Deadly Shadows had a similar creepy asylum section. The new one suffers in this comparison though, never quite as frightening. At one point an empty wheelchair rolled past with nobody pushing it, but the image was so trite I laughed instead of being afraid. 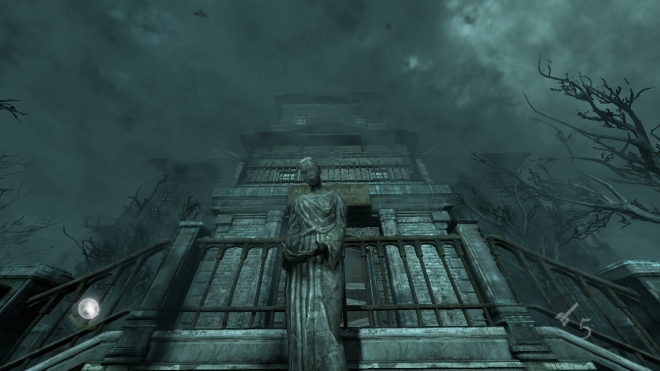 Elsewhere the old games are referenced by having the symbols of their cults re-used, cribbing the basic plot of Thief II: The Metal Age (in which a fanatic tried to give The City technological progress at the expense of its poorest citizens), and replacing one of Garrett’s eyes with one that gives him new abilities, like the end of Thief: The Dark Project did.

This new eye gives him access to “focus mode”, which highlights enemies and useable objects just like the detective vision from Batman: Arkham Asylum, darkvision from Dishonored, whatever Dark’s vampire sight was called and probably the same mechanic from five other games. Focus mode also gives you access to other powers as you upgrade it, like the ability to see noises (useful in a game where hearing them is so hard) or visualise the inside of locks. The focus bar runs out quickly through use, and can only be re-filled by eating poppy flowers you buy or pick out of the ground. I’m impressed they got that past the Australian Classification Board.

If focus mode feels like cheating you can disable it in an options menu that lets you customise the difficulty in a surprising number of ways. You can turn off the markers that guide your progress, the glint that lets you spot loot at a distance, threat markers over the heads of enemies, visible health bars, and more. This degree of customisation is a saving grace for Thief, letting you reshape it into something personal. It’s a shame this degree of trust in the player wasn’t visible everywhere in the game, because the places where it was – when I chose my own way to break into a manor and then discovered several other entrances I could have used, for instance – were its highlights.

The way I measure a stealth game is by the effect it has when I’m not playing it. The original Thief games made me spend days walking quietly and feeling self-conscious any time I stood under a bright light. This new Thief didn’t, although it did make me want to pick a flower I saw because it kind of looked like a poppy.