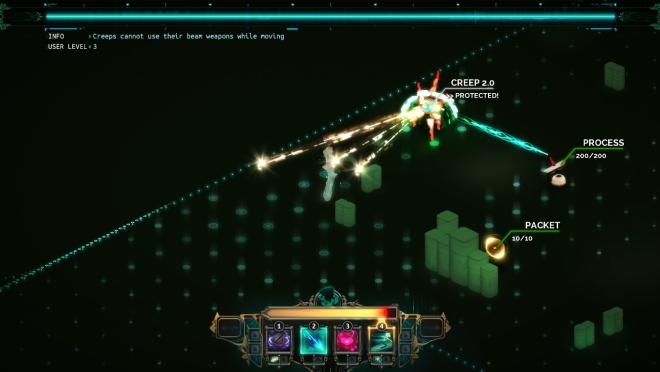 Cloudbank is a futuristic city that can be reprogrammed at a whim, where the inhabitants vote on tomorrow’s weather. An art deco version of Akira’s Neo-Tokyo, it’s all neon skyscrapers and wrought-iron gables, stained-glass windows and sleek motorbikes. It’s an absolutely gorgeous-looking (and sounding, just listen to this music) place to be dumped in. And you are dumped in it, dropped partway through a story already told, standing over a dead body and the Transistor, and left to piece things together from there.

But back to that combat, which is what you’ll be doing most in Transistor – ultimately one of those games about jogging past beautiful backdrops on your way to the next fight. The Transistor unlocks a bunch of powers, beginning with simple blasts of energy and working up through invisibility, short-range teleporting, clusters of bombs, summoning, repogramming enemies to switch sides, just a huge variety of functions. And each of those functions works in three separate ways: as one of your four active powers, as an upgrade for one of those active powers, or as a passive ability that’s on all the time.

Take Spark(), for example (all of Transistor’s powers have those brackets in their names, as if they’re computer programs). Spark() fires a scatter of explosive shells around a small area when used as an active; as an upgrade it makes whichever function it’s applied to split and affect multiple targets; as a passive it splits you, dropping a decoy image of Red each time you’re hit. Being able to use each function three different ways, and combine them – eventually earning duplicate functions so you can upgrade one with itself – means there’s an insane variety of options, some of which are so powerful they’ll demolish almost anything. Transistor nudges you into testing different functions and experimenting with this vast system in a couple of ways. One is that when you run out of health you temporarily lose access to the function used most frequently, regaining it a couple of savepoints later. The other is that each of those functions represents a character in the game, and if you use their function different ways you unlock more of their backstory.

Unlocking those profiles is essential to understanding what’s going on in Transistor. While it sets itself up as a noirish murder mystery, and there’s a nicely handled flashback following the first boss fight, after that it gives up on telling its story and leaves you to figure it out. While we criticise games for relaying too much exposition in talky, over-long cutscenes, that’s because those things would be better explained during the interactive parts of a game. The old storytelling rule goes “show, don’t tell” and although hiding central revelations and character motivations in blocks of unlockable text gets them out of cutscenes, forcing you to prove yourself to earn them isn’t really an improvement. It’ll make you feel clever, but it doesn’t lead to a satisfying story.

Plus, the menu is really clunky. Lovely music, though.