Vertical Drop Heroes HD is a fancied-up remake of a browser game you can play online at Kongregate (hence the HD), which is about adventurers exploring dungeons by jumping ever downwards from platform to platform (hence the vertical drop). It’s not so much a dungeon crawler as a dungeon faller. Nobody’s called a game about exploring a dungeon from the traditional left to right Horizontal Walk Heroes, so I guess that’s still up for grabs.

You start by picking one of three randomly generated heroes, each with different special abilities, weapons, and names, meaning you might be choosing from the mighty Hellspike, Skybane, or… Owlguard. Their appearances are random as well: big, boofy cartoon heads topped by helmets, hoods, masks, or flowers. If you don’t want to play a flower-wearing hero named Owlguard I don’t know what’s wrong with you. It’s a bit like Rogue Legacy only where that had jokey character traits like colour-blindness or gigantism here they’re useful things that give bonuses to your stats. Even ‘greedy’ is a beneficial trait, making coins and gems float towards you like some kind of financial magnet. Despite all these potential differences the characters feel very similar – usually one special attack kills at a distance whether it’s throwing daggers or shooting ice bolts, and one does something kooky like turning you into a golem or smashing blocks – but that’s fine because you don’t want to get attached to these heroes. They’re just going to die anyway.

Vertical Drop Heroes HD is another game with high difficulty and permanent death, which are all the rage these days. Your first hero isn’t going to survive all 10 dungeons but don’t worry, because your next hero inherits any leftover gold, which can be spent to upgrade hit points, damage, or pacifism. The pacifism is going to need explaining – at the start of each dungeon, as well as being scattered with monsters, traps, and treasure, there are floating heart icons that give variable amounts of both gold and experience. These vanish as soon as you kill a single monster, but if you maintain your peacenik tendencies you can earn a fair bit this way, and also justify that flower in your hair. At the bottom of each level is a boss who guards a portal leading to the next dungeon. Thankfully the bosses are just a bigger version of the other monsters with one special ability, not one of those annoying guys with an attack pattern you’ll need to memorise, a weak spot you have to aim for, or any of that nonsense. You can either defeat the boss to open the portal or spend five of the keys you collect in the dungeon if you want to keep your pacifism run going.

I mostly just stabbed them, but that was because I was spending my keys to unlock treasure chests and free caged heroes scattered throughout each level. Free a bunch of wizards, thieves, and knights to fight beside and you wind up tumbling downwards through exploding blocks as their special attacks fire off left and right in an enjoyably chaotic plummet. Add a second player in split-screen or online and it gets even messier.

There’s not a lot to Vertical Heroes Drop HD. It plays like a mash-up of earlier games – mainly Rogue Legacy and Freedom Fall – but it’s polished to a high enough degree that you’ll keep coming back for another try, first to complete all 10 levels then to beat your score in New Game + mode and to unlock more traits and weapons. It’s so disposable that if you select ‘save and exit’ halfway through a level it wipes your character but keeps your gold, assuming you’ll want to start fresh each time. It’s a snack game, as more-ish as chips and just as tasty. 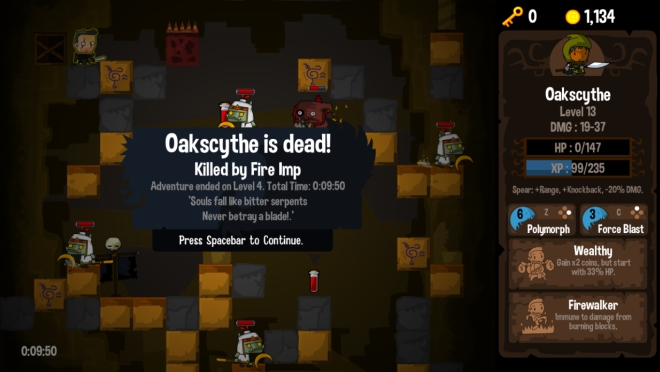