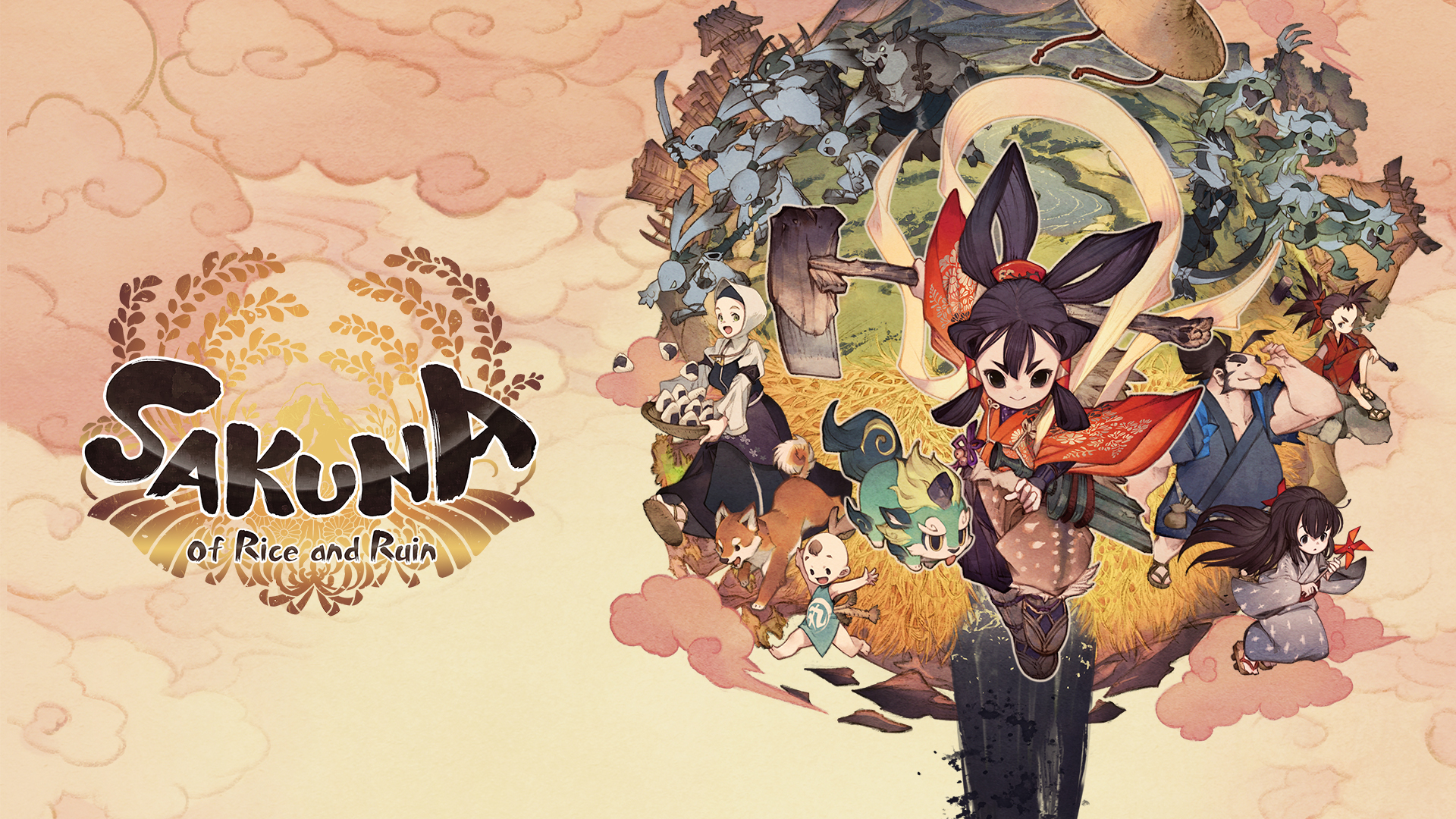 Sakuna: of Rice and Ruin is based in a Japanese folklore fantasy world where you play Sakuna, the daughter of Takeribi, the god of war and Toyohana, the goddess of the harvest. Living in the Capital of Yanato, part of the Lofty (immortal) Realm, she has cultivated the habits of a feisty, spoilt, lazy drunkard, who manages to get exiled to the Isle of Demons with some humans until they can figure out how to get the humans back to the Lowly (mortal) Realm.

This is a game where you will need to scavenge for food and defend your home… because the humans are helpless, and you are a lazy goddess. So, utilising the tools at your disposal, a sickle and hoe, you reluctantly get to work… Very reluctantly. Visually it has anime styling, but with Ukiyo-e (Japanese woodblock) influence giving it the hint of something akin to the game Ori. But also, with enough realism in the world to draw you into the farming simulation.

Yeah, so, Sakuna: of Rice and Ruin is a strange beast of a game. It’s equal parts: Side Scroller, Platforming, Fighter, Beat ‘em Up; a Japanese Role-Playing Game; and a Rice Farming Simulator. And the developers went far and beyond when it comes to the realism of this rice farm sim with cultivation, farming and harvesting. So much so that players have been known to research rice growing on the website of the Japanese Ministry of Agriculture, Forestry and Fisheries for just, rice growing guides.

So, the rice growing loop in a nutshell? You firstly fertilise your field using a base of night soil (yes, that’s human poop) and let it mature with some basics like beast horn and leaf matter, then you till it into the field while removing any stones, and then sow the rice by hand. Next, you maintain the field by keeping an accurate eye on water levels, ground temperature, the weather, and pest control. Once it is grown, you harvest, dry and then using traditional kokibashi you thresh them to strip the grains from the stalk. Then you polish the rice to your preference. And the resultant quality of rice is affected by every. Step. Of. The. Process. You get a nice little note telling you the details and results afterwards. The other side of the coin is the relatively standard side scrolling JRPG beat ‘em up. The stage design has some nice platforming mechanics, and the monsters are semi-repetitive, however the bosses can have quite a steep learning curve. Luckily, the games respawning mechanic is very forgiving, basically starting you from the start of the level on death, resetting just that levels progress.

So basically, you go out and beat-up monsters/demons to collect stuff to take home to use to make different farming tools or clothes and feed yourself and your mortal pseudo-family (daily boosts). Then, you spend the rest of your time growing rice, to also feed your family, but also because EVERY advance in your rice harvest directly correlates to upgrades in your battle prowess.

Throughout every part of the game, you are serenaded by the traditional Japanese instrumentation composed by Hiroyuki Oshima. The musical melodies softly relaxing while tending to your homestead and upbeat and motivating while in battle. There are also realistic soundscapes of the seasons and areas played over the top of these making for such a delightful aural experience that I sometimes just sat there and listened for the simple joy of it. Combat though is punctuated with Sakuna yelling the same few lines during combat, which I remedied by changing the language preferences to Japanese Voice Acting. This could be my inner weeb raising its head, but once I turned on the Japanese audio the voice acting soothed my inner farming and grinding angst making for a far more enjoyable experience.

Overall, while Sakuna: of Rice and Ruin has quite repetitive gaming loop, I found the farming therapeutic in its repetition. Moreover, coming home at the end of the day and having a meal with my pseudo-family and hearing about their pasts, the discussions of religion and belief or just family dynamics gifted me with the stillness and contentment of just, a happy family. If I had to classify this game in just one word, it would be forgiving. For the easy respawns, the many avenues to increased strength and game progression, the many ways it tries to help you along, and the family who not only helps you be a stronger, but also be a better, person in the end.