Skip to content
HomeReviewsThe Flame In The Flood Review 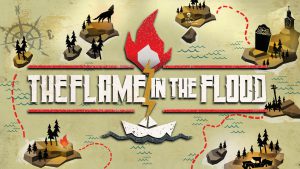 Flame in the Flood takes place in an apocalyptic world ravaged by a great flood. The focus isn’t on action, towering ruins or cool weapons, rather on nature reclaiming itself. Nature is your greatest enemy and ally in this game, propelling you down the river but trying to stop you every step of the way. You play as scout, a young survivalist, following a radio signal down a perilous river. You aren’t a fighter but have good survival skills to navigate danger and make what you need. Your only companion is your loyal (and near indestructible) dog Aesop, who finds resources for you, alerts you of danger, and even carries a secondary bag. Aesop can’t fight but also can’t get hurt so it’s a fair trade off.

It boasts vibrant visuals that overflow with a southern Americana aesthetic. The colours are rich and the shadows are intimidating. This style, with help from the soundtrack, creates a charming folksy setting that’s relaxing even when fighting for your life. Sometimes (usually during a thunderstorm at night) I would be unable to make out an area in the dark and an enemy would jump out. While annoying, it probably came close to the vision you’d actually have in that situation and it kept me on my toes. The animal designs are great, stylized, and threatening when they need to be. Though uncommon to meet, the designs for NPCs are full of character! 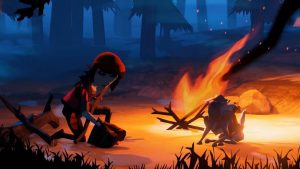 Flame in the Flood offers two modes of play, campaign and endless. Campaign has Scout searching for safety down river and will take around 6 hours, assuming you don’t die. The game does allow you to return to checkpoints when you die but these are pretty spread out, so you still feel the sting of losing progress. The game consists of either sailing down river or gathering resources from the locations on its banks. Thankfully, the game doesn’t have time to get boring because just staying alive requires managing so many things. Additionally, each world is randomly generated so each game is a different journey. Endless mode operates basically the same as the Campaign but with none of the story-beats and no ending. It’s best for people who want to achievement hunt or challenge themselves.

Flame in the Flood doesn’t offer a tutorial and just throws players into the thick of things. Mechanics are simple and don’t need an explanation, but it can take some time to work out how to deal with enemies and treat different conditions. While having a tutorial would certainly make things easier, discovering new ways to handle problems is one of the most rewarding parts of this game. Plus, what’s a survival game without a dozen deaths under your belt before you beat it? 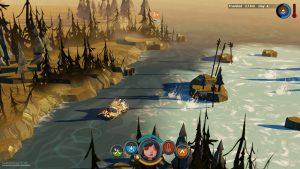 There are seven things you need to manage in order to survive your journey: hunger, thirst, temperature, energy, sickness, injury and raft integrity. To improve one usually requires resources that risk/reduce another, creating the delicate balance key to survival games. It’s easy to keep track of everything on the HUD, they even included a portrait that shows how close Scout is to death.

The crafting system in this game is one of the best I’ve played with. There is a logical path from basic items to late game ones. The scarcity of items, and the risk of obtaining them, is well balanced throughout your journey. Some things definitely don’t work as simply as they should like, when checking the stats of a particular clothing item it needs to be equipped, not just in inventory. This would only cost me an extra second or two, but I found myself annoyed each time. Thankfully the few flaws were never enough to take away from my experience with this game. 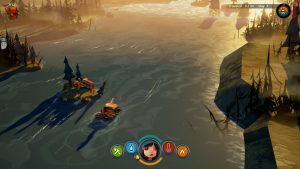 The soundtrack for this game is incredible and stands out for being comprised of acoustic country songs with strong vocals. This soundtrack, created by singer Chuck Ragan for this game, is heart of this game. It would still be enjoyable to play with different songs but would not be the same game and would not be the same experience. I fell in love with this game in one of my earliest attempts. I was bleeding out, incredibly thirsty and clinging to life on a raft held together with string. I was disheartened and ready to give up, when River and Dale began playing bringing a thunderstorm with it. I collected the rainwater and sailed down the rapids to the next town with more supplies. I lived for many days after that and made it twice as far as my other attempts. These songs are hopeful, emotional and always kick in at just the right moment.