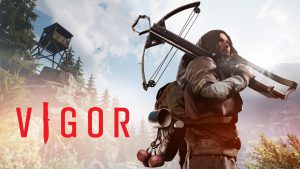 Vigor is a third person survival, looter shooter. The game has little story however it takes place in a post-apocalyptic Norway after the world was nuked. There seems to be a world power in charge as there are military air drops that happen frequently. Vigor begins with you choosing your outlander, you are then guided through a tutorial by a person named Alana. Once you get through the tutorial the story is pretty much over, from here your narrative is like that of any survival game; survive.

So what is this game? Well Vigor is an online looter shooter, borrowing the playstyle from Tarkov and mixing in some elements of a battle royal. We begin the tour of Vigor in this little hub world that you call home. Here you will find everything from your online store to crafting tables to a weapons range where you can practice. This little house is the main driving factor of the game, as you will be upgrading this ‘home’ until it is a fully functioning sanctuary. Sadly, there is not much in terms of customization just upgrades to an already existing template. 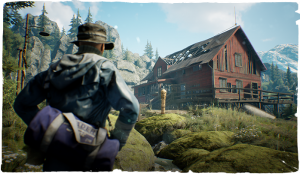 When you are not in this hub world you will be going out to loot. This is done through jumping into scenarios either alone or with a friend. You will fight on a map against a group of other outlanders, the goal is to kill, loot and survive. As the player you can leave at any time from one of the many escape routes on the map but, if you leave, you’ll miss out on the air drop that is spawned near the end of the round, and this drop consists of a loot crate containing precious materials. So, you might be wondering, “what’s the catch?” well, the catch is that if you die you lose everything you brought into that round including everything you found. So, you will always be playing with the risk of losing everything, which is very alike Tarkov in that way.

The gameplay itself is relatively fun and straightforward, displaying cool concepts. However, from my experience there was more frustration than fun. The third person controller does not translate well with the Nintendo Switch controller, making it hard to aim and move in a satisfying way. Things like this are important as there is little time to react to an enemy, this could be imperative to a life or death situation, thus making the game feel clunky and not as smooth as I would have liked. Unlike the Ghost Recon Series which is what I was expecting from this type of gameplay. The leader board system in the game is interesting, in order to rank up you must donate food to other players therefore making your decision to rank up or not a contest between comradery or greed. In the pregame menu you can select either with yourself or a team select the quality of the loot you can find. By spending some premium currency, you can fill a bar that makes either the airdrop or the loot be more valuable this adds a competitive clout effect to the game.

Being a survival game, the sound is extremely important in making the game feel real and impactful. This is something the developers succeed in, making me really think about my choices between running, crawling, or sprinting based on how the sounds were making me feel. The soundtrack is also very nicely made, taking inspiration from its Nordic country. Adding a cool new feeling to a survival feeling that we have not seen before. The gun sounds and other SFX are also very enjoyable with nothing else to be said other than well done. 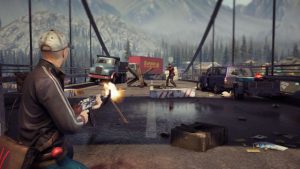 Vigor is an interesting and new experience that takes elements that are proven to work from other survival games. The game tries some new things that are interesting and sets the stage for some striking community play that I would love to see more off. However, the game felt clunky and a lot of my experience was unsatisfying, the player controller is hard to use and leaves combat to be avoided rather than desired. While the narrative in the game is one that is fairly no existent, it is awesome to see some new settings that could lead to some new and exciting gameplay frameworks. The audio in the game is great and the progression is easy to follow. Being a free to play game I would say it is worth picking up and trying out. Hopefully, the game will improve after the developers make improvements after this beta phase. 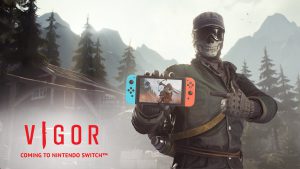