The goddess Eya has grown bored and is planning to end the world and start anew. There’s only one chance to stop it, a brave hero foretold by legend – sadly you’re not that hero. In Wandersong you play as a bard, that I named Lute, who wants to save the world whether it believes in him or not. You might not have a big sword, but you’ve got passion and a song to share. Accompanied by the ever-pessimistic witch Miriam, you travel the world to find pieces of the mysterious Earthsong. This game is split into seven acts, each in a unique location for you to explore, with new mechanics to use and new faces to make friends of. The world of Wandersong is beautifully vibrant, crafted with bold colours and a cute 2D-style that feel like they’ve been plucked from a storybook. The world reacts to your presence (and more importantly your music) which makes it feel incredibly alive, flowers, leaves, and animals all dance along beside you. Unfortunately, the character sprites aren’t properly sized and have jagged edges when played on a large enough screen. This can be distracting but doesn’t take away from the overall experience and isn’t a problem if playing handheld. Beneath the cheery aesthetic and whimsical concept of Wandersong run deeper themes of self-worth, self-identity, and destiny. It is a game about fighting when there’s no chance to win, of being hopeful for the sake of hope itself. 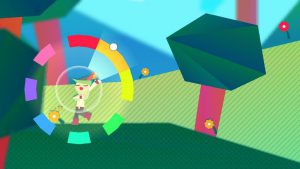 Each part of the world has a distinct theme and different musical mechanics to explore it. You’ll be channelling ghosts one day and steering a ship with song the next. Discovering new abilities feels like a natural progression of the characters and story, rather than just ‘unlocking’ something. Through this, and a steady incline in complexity, it’s able to keep things interesting. Most of the game follows the structure of travel somewhere new, explore and meet people, solve the problems with music, and learn another part of the Earthsong. Wandersong does keep things fresh with a diverse cast of characters, a sprinkle of humour, and a lot of puzzles.

The most important tool you have on your quest is your voice which can be utilized through the song wheel, at almost any point during the game. The song wheel is basic and consists of different brightly coloured segments that each produce a different note. Not only do you use this to navigate the world but to solve problems, talk with people, cure monsters, and even name yourself. The stick on my switch sometimes felt too clunky to navigate this wheel precisely, but it didn’t take much away from the game. Hidden throughout the world you will meet a mysterious figure named Mask who teaches you a new dance at every interaction. While not necessary for the story, it was nice to hunt him down during each arc. Once learnt, you can whip these dances out whenever you want. From an endless pirouette to caramelldansen, they will only enhance whatever scene they are used in. I really appreciated this feature when the story got particularly bleak, it’s hard not to feel better while dancing, and even harder when it’s a jaunty jig.

Puzzles come in two forms: copying a tune on your song wheel or using it to manipulate the environment. It manages to do a lot with these two concepts though. Copying a tune can happen as game of musical memory, a rhythm game or just a casual jam session. These puzzles aren’t the purpose of the game and so Wandersong is forgiving if you mess up in some way. The worst you will face is being reset to a nearby save point.  As a puzzle platformer newbie, I appreciated this, but some players may grow bored without a challenge here. 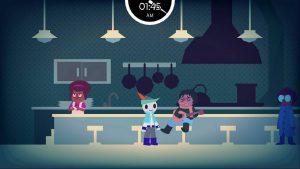 Wandersong promises a lot in its music-focused premise and does not disappoint. The OST weighs in at 160 songs spread over 3 albums, all of which was composed by A Shell in The Pit. Every song from the epic, to the melancholy, to the joyful are united by their gentle flowing sound and fit perfectly into the storybook world. Being able to sing along with the music really brought it to life, even if my timing was never perfect. Sound Effects were created by Em Halberstadt in close co-ordination with the soundtrack. Sometimes it’s hard notice the noises of the world but not because they aren’t worth noticing, they blend so well with the music that they can feel like another instrument in themselves. 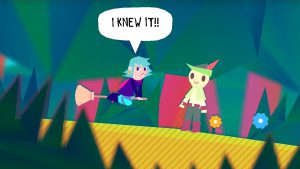 Wandersong is a game where you aren’t the hero but that’s okay. It is an incredibly unique experience and one that sticks with you after you finish playing. The world is beautiful and uplifting, crafted by people who clearly cared about what they were making. It’s the perfect game when you’re looking for something a bit more casual or if you’re looking for a pick-me-up.  If any of this review sounded intriguing to you, Wandersong won’t let you down.