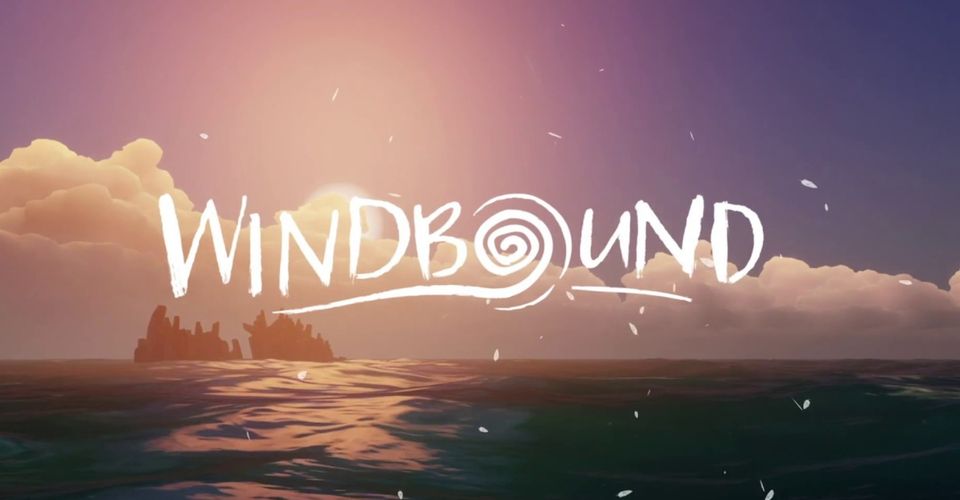 All around you stretches the ocean. A beautiful giant, but an unforgiving beast. Right now, you have no boat and you’re treading water looking at the short a small distance away. You haven’t been given a story to go off, all you have is the ocean and the land in front of you. There’s a shrine on the first island, you walk to it and climb to the top where a shell hangs in the air, waiting for you to wrap your hands around it.

Windbound has an impressive and gorgeous art style that brings you into the world. If you imagine Zelda: Windwaker meets The Breath of the Wild then you’ve pretty much got Windbound in a nutshell. The art style is reminiscent of both the aforementioned games. I believe it’s rated for ages 12 and up which makes a lot of sense since you play as Kara, a lone traveller who has to hunt, gather, and craft to survive. The game has a steep learning curve when it comes to combat.

You can pick from two different play styles: adventurer and survivalist. I’ve been playing on adventurer mode to focus on enjoying scavenging and crafting. The bonus on adventure mode is that when you die (and you will) you get to keep all of your stuff when you respawn. In survival mode, you lose most of your items,09 and you are sent back to the first level at respawn. I would have found this incredibly frustrating as a player so opted to play the more relaxed, adventurer mode. I think I died about four times in the first level even on adventurer mode. I almost gave up, but before I did, I read a couple of guides to get a good understanding of what I needed to be able to thrive in-game. I’d like to point out, that survival games aren’t my usual choice for games and so I wasn’t as used to the kinds of mechanics I was about to run into. It takes time to learn how to play Windbound, but once you get the hang of it, it’s easy to spend hours upon hours exploring islands and the seas.

There’s one mechanic that I find both equally cool and frustrating. Each time you die and respawn, you’re sent to a different set of three islands. They all serve pretty much the same purpose; you look for shrines and collect keys while trying to upgrade your boat. If you’re playing on survival mode, you will lose your boat each time you die, forcing you to start over completely from the beginning. Except for this time, you’re armed with the knowledge you have gained from your previous playtime. Ultimately, the more time you spend playing Windbound, the better you will get at it.

Crafting is a big part of your gameplay and you will need to get good at it to survive. Crafting is another reason that I really adore Windbound. I love the sense of accomplishment that comes from collecting parts for items and then seeing them done. You get to do a fair amount of cooking because you can slowly die from starvation. Food replenishes health and stamina, but uncooked food can do damage to your health. I spent more time crafting and cooking than I did trying to fight anything. This paid off pretty quickly because I was able to travel further and for longer without having to stop and refuel.

I loved spending time upgrading my boat and was constantly looking for ways to upgrade everything. Your boat acts as a good way to store extra items, but your overall storage is still pretty limited. I’d like to see more opportunities for furthering storage quicker into the game though. Not a lot of game mechanics are explained to players and there are some little side quests that should help you feel the world is a little bit bigger. I’m missing the jerky I left cooking on an island in level one. I can’t go back to it.

I think one of my biggest highlights for Windbound is that the soundtrack was something I could have happily had on in the background while doing work or writing my review. Zander Hulme has done an impressive job of creating aural cues for the player. There’s a variety of pieces that play in the background of the game while you’re exploring the islands. You can easily discern between the general gameplay music and the combat music. Enemies nearby are often cued through the music. Hulme has created expansive, atmospheric soundscapes that give the game world a grand size. I have included a section on accessibility because I am a disabled player that relies on some varied accessibility options to be able to fully enjoy games. The comments in this section are by no means a negative criticism of the studio. Accessibility options can be difficult to implement and I think that 5 Lives Studios has done a wonderful job for a small development studio. However, this section is included as more of a guide for players who may experience some disabilities.

I think younger players or players with cognitive disabilities might struggle with the gameplay. The gameplay isn’t that straightforward. It took me about half an hour of gameplay before I realised that there were actually objectives and a bit of a story that was happening. Tutorials pop up on the screen as you encounter new items and unlike other games, they stay until you’ve had a chance to read through the entire thing. However, I couldn’t find these tutorials later to reaccess them. I believe there are some guides online. So if you’re a player with a cognitive disability, it may be worth keeping a guide open while you play.

massive need for subtitles, but as a player who is hard of hearing, I was disappointed when some enemies were too easily able to sneak up on me. I had no idea what was going on until the battle music was playing and half my health was gone. I was able to chat with Zander Hulme about this and he recommended turning down the sound of the music while keeping the enemy sounds on full. It helps to be able to play the game with a good sound system or headphones. Unfortunately, the game does not include a visual tracking system for enemies. As a hard of hearing player, I have to get a little bit creative about playing with the sound up.

Unfortunately, I wasn’t able to remap the controls on my PC. I am unsure about the ability for remapping on other consoles. There are generally workarounds for this if you have a physical or motor disability that requires the ability to remap.

Overall, Windbound is a tough but thoroughly enjoyable experience. I think players over the age of twelve, who enjoy survival adventure games will have a blast with Windbound. While I ran into some issues as a disabled player, I think that 5 Lives Studios has done a wonderful job in creating something that is both visually and aurally appealing to players. Even if you’re not the biggest fan of survival RPGs, the art style alone in Windbound is enough to keep you coming back. It is far too easy to just spend hours hanging out on an island cooking, crafting, and ignoring the narrative objectives. So if you want a fun Sunday afternoon game, Windbound is the one for you.