Club EA
Electronic Arts has been in the headlines this week after announcing a new Lord of the Rings franchised game, The Lord of the Rings: Heroes of Middle-Earth. The game, developed by Capital games, is rumoured to be a Star Wars: Galaxy of Heroes reskin, with all the free-to-play collections you would expect.
In more surprising news, EA and FIFA have parted ways announcing that after this year’s FIFA 23 “a new era” will begin next year with EA Sports FC series. Thanks to the over 300 licences EA had accumulated, EA insists things will not be changing much and fans can expect “the same… modes, leagues, tournaments, clubs and athletes”. In response, FIFA announced that the split will allow FIFA to launch new games developed with other studios and publishers and multiple “non-simulation” games to launch later this year. FIFA president Gianni Infantino insisted “…that the only authentic, real game that has the FIFA name will be the best one available for gamers and football fans… The FIFA name is the only global, original title.”

Microsoft Integrate Access
Microsoft this week released information regarding a whole new ecosystem of accessories, both for adaptation for accessible design and for Xbox cloud streaming. Coming later this year, Microsoft is set to release a series of adaptive controllers that allow for custom inputs and the ability to connect and design 3D-printed toppers and tails to completely customise the design suitable to an individual’s needs. But if one is not enough, the Microsoft Adaptive Hub allows four wireless connects to these adaptive buttons, and 3 more devices as needed. Allowing people with physical limitation empowerment in the digital age.
And talking of access, Microsoft has announced the evolution of their online gaming cloud… beginning with Fortnite. You can now to play Fortnite free on iOS, Android or PC with Windows if you have a Microsoft account. This “everywhere initiative” from Microsoft is planned to expand to your home tv as well, with a puck or dongle device similar to the Amazon stick or Roku puck, and will have access to a library of games through the Xbox Game Pass Ultimate. However, should you already have a Samsung smart TV, Microsoft is currently working with them to create a native app. This initiative is set to be available within the next 12 months.
Speaking of Microsoft, Microsoft Excel integration is coming to Eve Online. Colloquially known as “spreadsheets in space” Eve Online is finally getting native integration with Eve and Microsoft creating the API’s to finally help manage the complex in-game economy. While the API is in its early phase of development, the number crunching fans of Eve Online let out literal cheers from the audience at the announcement.

Activision/Blizzard still making headlines.
In the wake of the multitude of accusations and lawsuits made against Activision Blizzard, the second fulltime leadership role has been filled to combat the “created culture of ‘constant sexual harassment’ and gender-based discrimination” within the company, and she comes from Disney. Jessica Martinez is credited with 14 years of experience at Disney and now takes on the roll of VP, Head of Culture with the responsibility of “growing and implementing our culture strategy” while leading the learning and development team and working closely with communications, events, and other leaders within Blizzard.
And she has her work cut out for her with Raven Software QA staff actively seeking support from other Activision Blizzard staff to aid in unionisation. Since Activision Blizzard higher ups chose not to voluntarily recognise the Game Workers Alliance earlier this year, staff of Raven Software have sought to be recognised by the government agency National Labor Relations Board. Internal emails reportedly show Activision Blizzard emailing staff with the graphic “Please vote no.” after a town hall meeting in April. The ballot is set to be counted over video conference on May 23.

And now for the new releases.
Tuesday May 10, turn-based strategy game Songs of Conquest from Coffee Stain Publishing is coming to PC. This War of Mine: Final Cut is also being released on Xbox Series S & X and PlayStation 5, and Brisbane’s own award-winning Unpacking is coming to PlayStation 4 & 5.
Wednesday May 11, Brigandine comes to PC, and the PC roguelite Source of Madness is releasing for PlayStation, Xbox, and the Switch
And on Thursday May 12, become a detective in the live-action mystery adventure game The Centennial Case: A Shijima Story coming to PC, PlayStation, and Switch. And to PC also on May 12, battle legends and gods in the isometric ARPG Achilles: Legends Untold. Or try Cantata and fight for your faction’s survival in this indie, pixel-art, turn based strategy game. And finally rock out with your cactus out in indie platformer Flippin Kaktus. 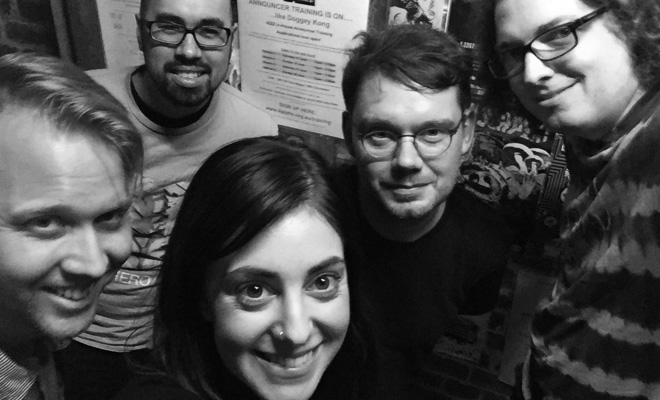 In studio: Razor, Lee May, Candi Payne and chip musician Slato joins us as guest host.
We’re joined in studio by musician/radio host Tim Shiel. We talk about his career as a musician, the soundtrack to best-selling mobile game Duet, and his collaboration with the Queensland Symphony Orchestra. Lee gets back inside the head of B.J. Blazkowicz for Wolfenstein: The Old Blood.
Aired 13 May 2015. ‘Card Wars’ was originally an episode of the Adventure Time cartoon parodying collectable card games like Magic: The Gathering. In that episode Jake the Dog perfectly summed up Magic: “It’s a fantasy card game that’s super-complicated and awesome but, well, it’s kind of stupid.”

Now there’s an app that lets you play the actual game as seen in the show, which is an idea that’s simultaneously dumb and brilliant. Thanks to the popularity of video games like Hearthstone, those mechanics are everywhere – it seems like every fantasy setting has its own virtual card game where you summon monsters that crawl off the cards and onto a digital tabletop – and ripe for making fun of.

END_OF_DOCUMENT_TOKEN_TO_BE_REPLACED A game like FTL: Faster Than Light gives you basically the full Captain Kirk Star Trek fantasy. Your own spaceship, your own crew to boss around, and an endless supply of enemy craft to hail over the intercom and bargain with or blow out of the sky. Out There is an undeniably similar game of crossing the galaxy in your own spaceship, but it’s a very different fantasy: you’re alone, your ship has no weapons, and your greatest enemy is an empty fuel tank. It’s not Star Trek; it’s a bleak Polish novel about the vastness of space.

The first time I played Out There I realised I was running low on fuel, so I set the course for a gas giant I could probe to harvest hydrogen. Flying to that planet cost fuel, getting into orbit around it cost more fuel, and when I pressed the button to send the probe I discovered that also cost fuel, which I no longer had enough of. I didn’t have enough fuel to refuel. In Out There you don’t get to reload if you goof like this, it’s game over. You press the “give up” button and start again.

I press the “give up” button a lot.

END_OF_DOCUMENT_TOKEN_TO_BE_REPLACED Between missions my crew of data thieves and mercenaries stay in a hideout in Berlin’s Kreuzbasar. As well as hackers and killers, one of them’s a shaman – Shadowrun mixes magic with its near-future technology – and he used to front a punk band. When was the last time you met an actual punk in a cyberpunk game? So I ask him, “You can sing?”

END_OF_DOCUMENT_TOKEN_TO_BE_REPLACED We chat with James “Peanuts” Schultz (community manager) and Matt Knight (designer/artist/voice artist) of Halfbrick Studios (Fruit Ninja, Jetpack Joyride, Fish Out Of Water).  In this candid interview we discuss Colossatron: Massive World Threat and Band Stars, find out what it’s really like in the games testing department at Halfbrick, and we poke Matt repeatedly until he does his “Rick Dalton” voice.