Lost Ark on top of the charts!

The new fantasy MMO by Smilegate has reached over 1.32 million concurrent players on Steam over their launch weekend. This makes Lost Ark the second highest concurrent peak in Steam history, second only to PUBG: Battlegrounds. It’s a pretty impressive feat for a new title beating out the likes of Counter Strike: Global Offensive, and DOTA 2. Originally Lost Ark was released back in South Korea in 2019 and has been brought over to a western audience by Amazon Games. Currently Smilegate have said, “We’re blown away by the number of players that have joined us in Lost Ark since our launch on Friday. Arkesia is filled to the brim with eager players, so we’re working as quickly as possible to set up an entirely new region of servers in Europe.”

The Lord of the Rings and The Hobbit for sale!

The rights that is, and not just to the video games. Variety reported recently that the current owner Saul Zaentz Co. has decided to sell its Tolkien holdings, thus giving up the precious merchandising, movie, video game, and live event rights, this includes all titles from J.R.R. Tolkien. This selling of rights happens to come just in time for Amazon to officially announce its long-awaited television series called The Lord of the Rings: The Rings of Power. Middle-earth is a very popular place for game developers over the years with many spin-offs and lore link-ins. There are also many projects in the works revolving around The Lord of the Rings franchise. Only time will tell who snaps up the rights to J.R.R. Tolkien with properties expected to sell for a minimum $2 Billion.

Developers of The Sims have decided to not sell their latest expansion My Wedding Stories in Russia. Russia has strict anti-LGBTIQ “gay propaganda law.” In this latest expansion of The Sims players are allowed to create their dream wedding or a catastrophe, all the marketing for this latest expansion features a lesbian couple of colour Camille and Dominique as they plan their big day. EA have said in an announcement, “As we moved through our development and brand storytelling process, we became aware that the way we wanted to tell Cam and Dom’s story would not be something we could freely share around the world.”  “We are steadfast in upholding that commitment by shining a light on and celebrating stories like Dom and Cam’s, so we have made the decision to forgo the release of My Wedding Stories where our storytelling would be subject to changes because of federal laws.”

A study conducted by Bond University’s regular Digital Australia report has revealed that 17 million Aussie’s play video games in some form. 5.5 million households own two or more dedicated game playing devices while 92% of Aussie homes own at least one gaming platform. This report has shown some pretty interesting information about the habits of Australian’s during the pandemic, mostly relating to gaming as a form of social connection with 76% of parents who were part of the study having played some form of video games with their children throughout. The average age of a video game player is now 35 and has steadily risen since the generation of Game Boy, NES, SNES, and PS1. And most interestingly is that while streaming TV/Movies is in the number one spot, Games is now in second place before free-to-air television in Australia. If you’d like to check out all the stats click here.

The gaming giant Activision Blizzard has announced that they are currently putting their plans on hold for an online BlizzCon event in 2022. A spokesperson from Blizzard said, “Any BlizzCon event takes every single one of us to make happen, an entire-company effort, fuelled by our desire to share what we create with the community we care about so much. At this time, we feel the energy it would take to put on a show like this is best directed towards supporting our teams and progressing development of our games and experiences.” BlizzCon 2020 and 2021 were both cancelled due to the COVID-19 pandemic and with next year’s BlizzCon on ‘pause’ it is speculated that the recent situation Blizzard has with the widespread discrimination and sexual harassment lawsuit may be cause for delay relating to whether BlizzCon 2022 is going ahead. Blizzard also suggested that if the event was to return it would be a very different event from the ones we’re used to seeing.

Dead by Daylight – Available on all platforms Dead by Daylight is a four-person survival game with the goal of escaping a killer before daylight breaks. Four players take on the role of a survivor while one player hunts in a big one vs four multiplayer survival mode. This is a great game to play with friends and enjoy a heart pumping adrenaline fuelled action.

Phasmophobia – Available on PC and VR Phasmophobia is an investigative co-op horror game where you must work with your friends to identify the types of paranormal activity inside different locations. Tasked with four objectives you must complete, but do it quickly, because the longer you stay in the haunted house the more your sanity drops and the ghosts start to hunt you.

Little Nightmares II – Available on Nintendo Switch, PS, Xbox and PC, Little Nightmares II is a puzzle-platformer which is a little less terror and more spooky. You explore and solve puzzles in order to progress through the narrative as this little boy guided by a girl in an ominous yellow raincoat.

Resident Evil 4 VR – Available exclusively on the Oculus Quest and relive the arguably most terrifying Resident Evil game of them all in VR, almost certainly an experience filled with jump scares, screams, and pure terror.

Dead Space – And finally, a classic available on PC, Xbox, Switch and PC is Dead Space, looking for some regular old poop your pants kind of action this Halloween. Play this classic space horror  game, a single player campaign where you are in an interstellar mining ship exploring and unfolding the creepy story whilst fending off jump scares and terror from unknown extra-terrestrial forces.

This week in game releases: The weekly gaming news, Zahra discusses their time with Grow Big or Go Home! Maylee reviews Nuts and general banter about gaming non-sense that you love. 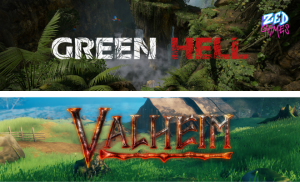 This week Evie, Tobi, & Maylee hang out in studio discussing the week in gaming news, a review on Green Hell and discussions about the latest steam craze VALHEIM.